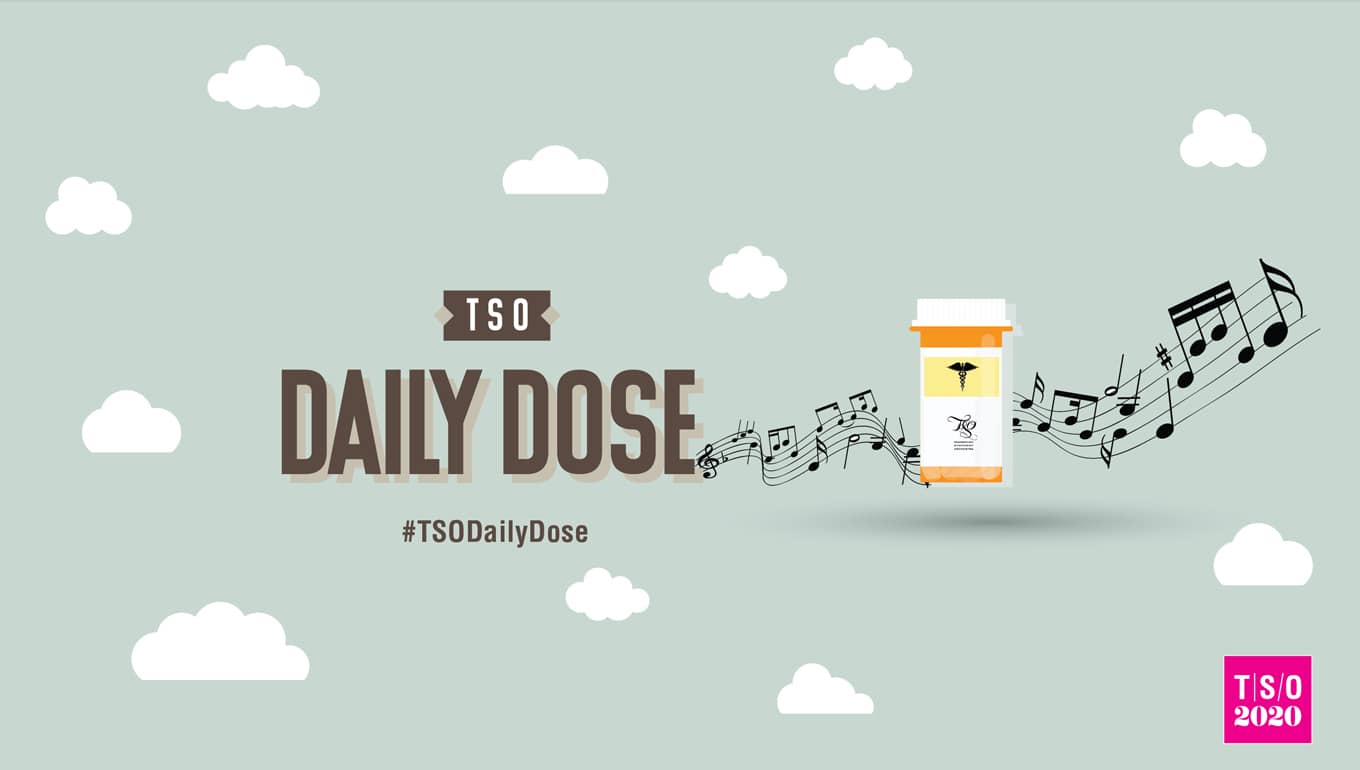 When COVID-19 was declared a pandemic, Australia’s creative industries were instantly thrown off course. And for arts organisations whose main offerings were centred around live events, there came an immediate need to adapt to this new environment.

This is why you might’ve come across the new TSO Daily Dose during your time online. It’s a video-based initiative that places the orchestra’s musical talent front and centre – importantly, during a time in which they are prevented from playing to a live audience.

Videos in the series have ranged from fresh performances with leading TSO players, through to insightful interviews with artists and guests. Thousands of followers have so far tuned in from the comforts of their self-isolation. Perhaps you too have been among this home-based audience, enjoying a performance of Bach from TSO cellist Jonathan Békés while you have your breakfast; or listening to an interview with TSO Chorusmaster June Tyzack to find peace in song during an overcast afternoon.

Either way, the community’s interest in this new series gives evidence that even during a pandemic, the world hasn’t forgotten the value of music.

Of course, it must also be acknowledged that when an orchestra shifts its entire offerings to a digital medium, there’s a tech team behind the camera making it happen. Caleb Miller is one of these key talents bringing it all together. Off the back of his work as a TSO production casual and operations assistant, he’s now engaged through his own business Mac40 Media to help turn around these daily recordings for the orchestra.

If you haven’t watched one yet, here’s an introduction to give you a taste of what they’re all about:

As you might imagine, one of the most demanding parts of Caleb’s new role is the speed at which he must film and edit – but luckily, he doesn’t need to scurry through this work on his own, and instead describes the fast-paced creation of the TSO Daily Dose as “a group effort like no other”.

“Musicians were ready and willing to keep the music going, preparing music, standing in front of cameras and being recorded – they were ready fast,” Caleb says. “They are offering us their time in learning and rehearsing these pieces so that we can deliver content to people all over the world, for free, each day.”

The videos also enable the TSO to engage other members of the local creative community, such as BH Photo’s Brad Harris and Hutch TV’s Adam Sills, who have previously captured some of the orchestra’s full live performances – content now celebrated with inclusion in the Daily Dose.

So in an era of strict physical distancing and isolation, how is it possible for such a substantial creative team to come together to produce a video?

Though TSO Daily Dose presenter Mitch Nissen chants to his viewers the mantra “keep calm and sanitise”, efforts to keep the studio clean can be a complex procedure for arts workers such as Caleb.

“Have you noticed that none of the interviewees in the TSO Daily Dose are wearing microphones?” Caleb says. With distancing measures in place, Caleb avoids placing the little lavalier mic on the bodies of his subjects, and instead combines advanced audio production techniques with overhead microphones to capture their voices.

It might sound like a trivial observation, but it’s one of the many adjustments to his daily work that enforces a physical distance – ultimately contributing to the health of our community.

Caleb also likes to keep an eye on surfaces his teammates might touch, even if they’ve washed their hands, and sometimes switches between his standard and back-up gear – just to keep on the extra safe side.

Back in his studio (where Caleb has chosen to set up a quarantine room), he places his gear straight on the floor – marking the dates they were last touched. Soon after, he hops in the shower.

“This might seem excessive to some but as a small business, I have an associated risk every time I go to work, and need to be on my best behaviour,” Caleb explains.

“An inconvenience to me of half-an-hour a day could keep me from getting sick for weeks, and I hope lots of Tasmanians are also doing similar.” 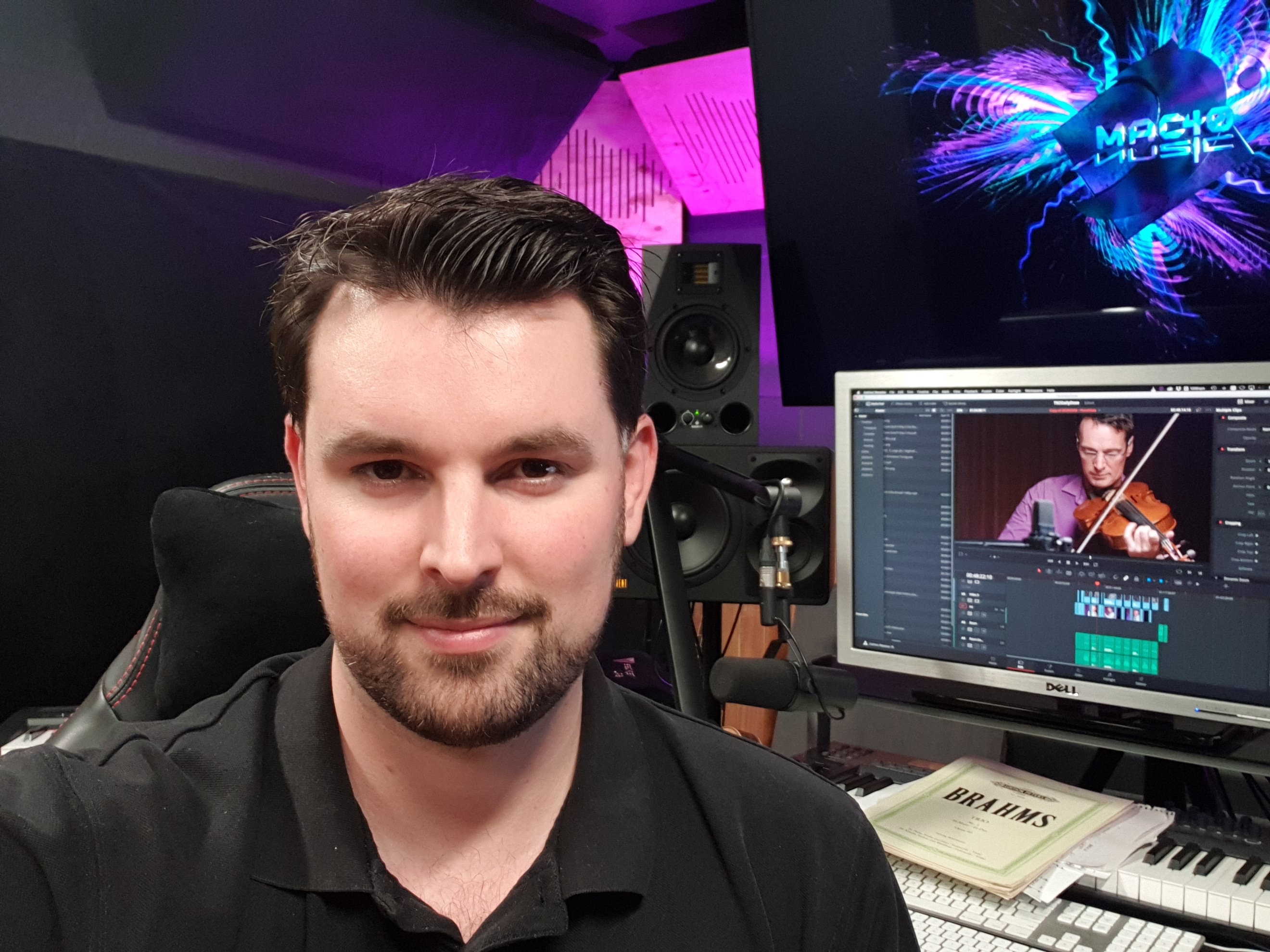 After his work environment is clean and set up for a day of filming, Caleb says his demands of the TSO’s musicians are simple: they’ll rehearse together for a couple of takes, during which time Caleb will instruct the players to ignore him as he potters around the studio with his gear – sometimes getting close enough to capture the “fingers on fretboards, bow against a string”.

“I think an online audience will want to see those details like they can’t see from sitting in a concert hall seat,” he predicts. “I like it feeling like we are closer to the musicians than ever before.”

The soft lighting, dark backgrounds, coloured backlights, and high production value are all chosen to create a package in the “common style of shooting for YouTube content creation”.

“It’s a different look for an orchestra – and right now, I think we need different,” Caleb explains. “It can feel fresh, and it needs to translate to smaller smartphone screens, which wide shots of orchestras do not. I feel that people who know me can see my sensibilities everywhere on these videos.”

As might be predicted, the musicians have no trouble delivering consistently high-quality performance to match Caleb’s visual efforts. The music recordings can take up to an hour, with Caleb shooting on three cameras – two on tripods and one hand-held.

“We do a few takes, and I focus the handheld camera on finding the interesting tasty bits – the things I find exciting.”

Then, he’ll work with presenter Mitch (who is also the TSO Principal Bass Trombone) for another hour or two, filming introductions and interviews.

“Conversation interviews are actually easy to shoot and edit, because the musicians are just having a conversation between friends,” Caleb says. Incredibly, they’re always shot in a single take – and without a script.

“Mitch has a basic idea of what he wants to ask, but these musicians are so knowledgeable that anything they discuss is just gold.”

At the end of the day, it takes quality talent – and a quality production team – for an arts organisation to go down the new road of video content during COVID-19. As Caleb reminds audiences, the video content is free to watch, but it can still be costly to produce: “Any generosity towards the TSO allows us to keep working.”

While audiences can make financial donations to the TSO on its website, even “just connecting with us, and letting us know how much you appreciate the work we are doing by commenting and sharing on Facebook, that means a lot”. 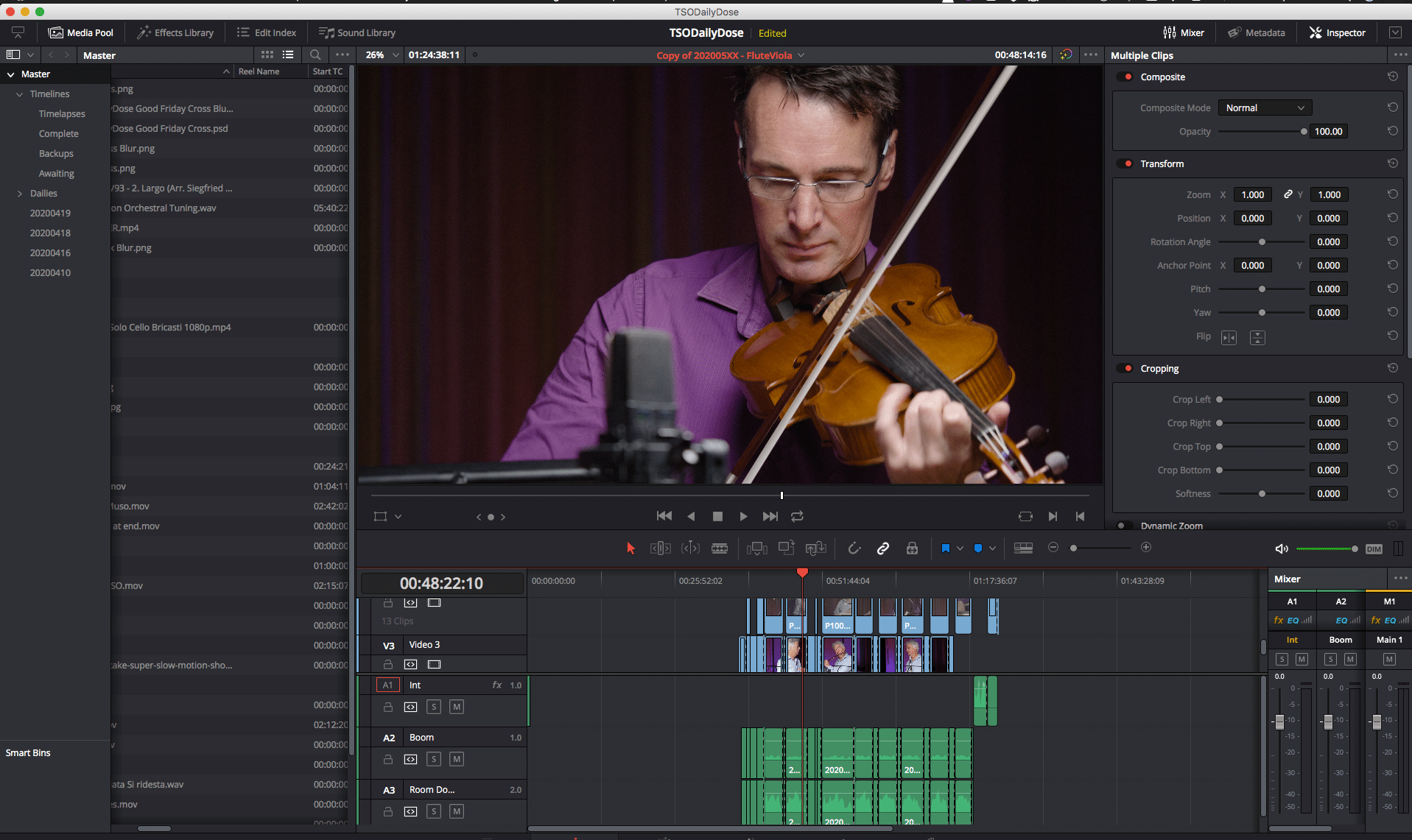 If you haven’t yet checked out the TSO Daily Dose, it’s not hard to take that first step – there’ll be a new video up for you tomorrow, the day after, and the day after that.
“I’d love for people to see TSO Daily Dose as a gift – not as something heavy or hard to do. It’s complex technically, but it should feel new and fresh while audiences are stuck seeing the same four walls of their lounge room each day.

“Mitch and the other musicians' humour and lightness helps that, too. It keeps it relaxed, and I feel like I’ve gotten to know these players so much more over the past month.”