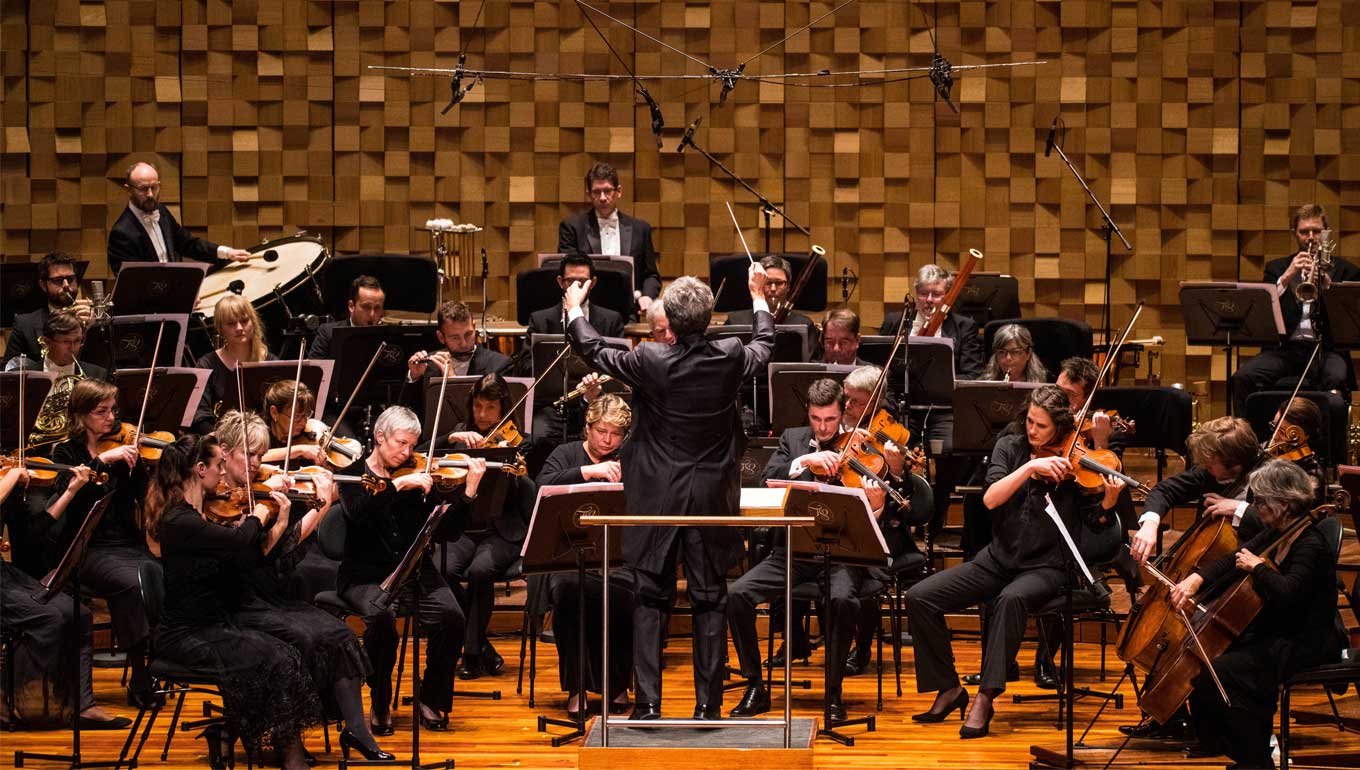 The regular Tasmanian Symphony Orchestra concertgoer may be familiar with the classics. From Brahms to Tchaikovsky to Sibelius, we are supplied a regular dose of music we know, love, and bop along to.

But what you mightn’t know is that the TSO also boasts an entire back-catalogue of albums – and many of these recordings showcase music by leading Australian composers.

Some are brand new, and some go decades back. So I decided to give them a listen – and I’ve ranked the ones that most stood out to me. (Because who doesn’t love a good music countdown?)

Before we kick off, though, I’ll have you know that this list is by no means exhaustive. If you’d like to make your own list, you can jump onto the TSO’s Spotify collection and check out even more music. Nevertheless, this list will give you a good starting point for your journey into some lesser-known gems of Aussie composition.

As an Australian music journalist who has been writing about the industry for close to a decade, I will unashamedly confess to you that I hadn’t heard of Frederick Septimus Kelly. The unfamiliarity of this name therefore indicates to me that he is rarely included among concert programs, recordings, or even in academic courses.

And these are a few of the reasons I was keen to give him a listen.

Kelly was born in Sydney, way (way) back in 1881. He died at just 35 years old. During his life, he became a rowing fanatic, studied in Oxford, and fought at Gallipoli.

This album opens with a calming swell of strings in Elegy – In Memoriam Rupert Brooke.

I also reckon it’s the stand-out work. Kelly wrote this 1915 piece from his tent in Gallipoli, out of love for his poet-friend Rupert Brooke who died there from illness. (Sadly, Kelly himself died the following year during battle in France.) This work is reminiscent of the awe-inspiring-yet-sentimental feel of English composers such as Vaughan Williams.

Such a feeling is quickly changed when arriving at the composer’s more upbeat German Symphony. Another treasure within is The Somme Lament. They are both world premiere recordings.

The Etruscan Concerto is utterly delightful. The name is a reference to D.H. Lawrence’s 1933 Etruscan Places.

It’s here paired with Letters from Morocco, with visceral movements portraying scenes such as The Streets Smell of Orange-Blossom, Man is Hated in the Sahara, and Sometimes at that Hour there are Drums. The libretto is in English, and it assists the music with cultural scene-setting; the works are composed with a musical “exoticism” that was fashionable during this era and further explored throughout Peggy Glanville-Hicks’ career.

In the notes that accompany this album, writer Graeme Skinner brought forth a statement by Edward Cole that was published alongside the Etruscan Concerto’s 1956 American recording: “Peggy Glanville-Hicks is the exception to the rule that women composers do not measure up to the standards set in the field by men.”

I needn’t inform you that the very idea of this being a “rule” is fundamentally flawed. For this reason, the statement is as controversial today as it may have been in the ‘50s, if for opposite reasons. Thankfully, we no longer judge the seriousness of the composer by her gender. Glanville-Hicks’ music is simply excellent and enjoyable.

This is a work that would be grand live, though its vigour is not lost in the recording. The featured work is Symphony No. 3 Century, Op. 91. With its fortissimo brass and dissonant strings, the first movement Struggle is as you’d expect it to be.

This work was witnessed by thousands who attended its performance at Canberra’s 2013 centenary celebrations. I can only imagine how substantial it might’ve sounded at the Lake Burley Griffin event. Conceptually, Struggle refers to the relationship between the landscape and the city in the time before 1913.

It’s a theme that’s continued through the next movement Dream which, according to Nicole Saintilan in Resonate, “describes the moment where Griffin tries to visualise how his architectural ideas could fit onto the wide undulating, natural spaces of the Australian landscape”. The third movement, Create, hints at the way Canberra was built; not without its challenges.

Though not included in our little ranking here, Andrew Schultz: Orchestral Works was released by the TSO in 2011, and I’d point to it for further listening, if you find yourself getting into Century.

This album of Graeme Koehne’s works could make the rank for the names alone: it features pieces titled Forty Reasons to be Cheerful, The Persistence of Memory, and Time is a River, among others.

Cheerful will put you in the intended mood, but if you have some time up your sleeve, I’d recommend sticking around for The Persistence of Memory – it was premiered by the TSO in 2014, and was composed as a dedication to late Sydney Symphony Orchestra principal oboe Guy Henderson.

Though an Australian work, the Divertissement: Trois pieces bourgeoises: 1. Rhapsody has all the magic you’d find in a French lullaby. The album is a beautiful journey from beginning to end.

(I’ve self-imposed a rule not to include more than one album by the same composer in this ranking, so I’ll take a moment to lead you astray and advise you to check out Graeme Koehne: Tivoli Dances from 2008, which has an entirely different and jazzy feel.)

The album was released in 1997 – the year following the incident to which the opening Port Arthur: In Memoriam responds. It’s a soothing work that I hope might’ve given some comfort to a state stricken by such a tragedy. (This album is also tailed with an original arrangement of this work, which features solo oboe.)

The Fifth Continent: Prologue begins with narration: “The world revolved and revolved, and disappeared. Like a stone that has fallen into the sea, his old life, the old meaning fell, and rippled, and there was vacancy – with the sea and the Australian shore in it, far off, far off as if he had landed on another planet.” What follows is a dissonant musical adventure.

This suite was composed in 1963; the TSO gave its premiere that year. Coincidentally, as composer Glanville-Hicks had been for her Etruscan Concerto in our list, Sculthorpe too was inspired by D.H. Lawrence and referenced the 1923 novel Kangaroo through this narration. (There is an excellent breakdown of this work on the ABC website, if you’re interested in learning the context behind the composition.)

Also notable is Little Suite, which commences with the Sea Chant movement; but it arguably sounds more pastoral. Whether you imagine the sea or land, it’s a gorgeous little melody among a bed of strings.

Though Malcolm Williamson was a Sydney-born 20th-Century composer, his Our Man in Havana – Orchestral Suite immediately rings with classic Hollywood moments: there are James Horner-like orchestral jabs; Leonard Bernstein-like moments of jazz and tension; and romantic strings juxtaposed against lively percussion for a country-western feel. It’s cinematic, but despite the influences, it also rings so true of Williamson’s own compositional voice.

Epitaphs for Edith Sitwell is an odd one: it leads you to expect a quiet work with slow and gentle-moving strings, until it’s interrupted with loud and angular sections that climb over the top. Sitwell was a poet who lived and died in England around the turn of the 20th Century.

The style of this composition may draw from the characteristics of the organ – the instrument for which it previously written in 1965 (in 1972, it was arranged for string orchestra). Either way, I found it an interesting listen, and it left me on edge.

Wild Swans was my gateway into Elena Kats-Chernin’s music. I’ve since listened widely to, and written widely about, her work. The first time I heard this particular piece of music was when the TSO performed it with Katie Noonan, a few years back. I hadn’t yet listened to Kats-Chernin’s compositions performed live, and was immediately captivated by the fantasy land she so effortlessly creates.

This recording features soprano Jane Sheldon, instead of Noonan. It’s now 15 years old, but it is an essential album for any music-lover’s collection. Wild Swans is musical storytelling at its best.

Perhaps because of the immediacy with which Kats-Chernin can sweep you into another world, I still most enjoy the first movement, Green Leaf. But others to look out for in this ballet-turned-concert suite are Eliza Aria, Knitting Needle, and Transformation.

This was an obvious call for me, and I’ve placed the album at number one for various reasons. Firstly, it’s part of a collection of albums that feature Australian music, composed with the intention to lower anxiety among vulnerable patients and families in hospital settings. When music is so often found to provide benefits to health and wellbeing, I consider the function of this recording to be as relevant as its music. It is used for good.

Beyond the concept, though, this volume also includes treasures from Australia’s brightest in compositional talent: Kats-Chernin, Paul Stanhope, Matthew Hindson, Maria Grenfell, and Koehne among many others. (Though not the intention, this may also position the collection as a gateway into local music, if you’re not yet familiar with these names.)

Regardless of the individual works being stunning in their own ways, I can’t help but respect a collaboration that brings together Australian composers with a world-class orchestra for an album designed to lift the spirits of its listeners.

What would you include in your Aussie music rank? Jump onto the Tasmanian Symphony Orchestra’s Spotify, and curate your own listening experience.

Stephanie Eslake is a freelance classical music journalist and the founding editor of CutCommon. Her arts writing has also been published in Limelight Magazine, ArtsHub, Meanjin, and The Music among others.