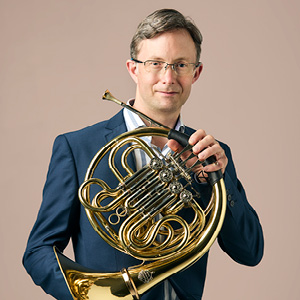 Sit down with a soloist: Greg Stephens

When you watch the musicians of the Tasmanian Symphony Orchestra, you clap and cheer at the end of a piece – then you do it again at the end of the concert, but louder. You clap because you loved the music, admired the skill of the players, appreciated the way they worked hard to bring you a few hours of sound that moved you.

As a concertgoer, I feel as though clapping allows me to express myself and share these sentiments with the players while echoing the joy of listeners around me. But what I’ve never thought about is the way musicians who have reached a calibre of playing worthy of their placement in the TSO – that is to say, critically acclaimed players with a world-class orchestra – still need to hear this support. They’ve made it, yet they still find fulfilment in that simple action known as encouragement.

To TSO Principal Horn Greg Stephens, encouragement plays a functional role in music making. It helps players of his section, and around him in the orchestra, feel positive about the work they’re doing.

In an industry as tough as the arts, that can be a very powerful thing.

“Maybe it’s weird to say, but you can sense that there’s friendliness, and attentiveness and support,” Greg says of performing in front of Tasmanian audiences.

“You feel it in every concert as we sit down and play, and hear the applause at the beginning. From that moment, you really think, ‘Well here we go, we’re in good hands here’. Because there’s that level of comfort,” he shares.

“I think it gives such a great sense of encouragement to the whole orchestra.”

Speaking to Greg for the first time, ahead of his solo concerto performance with the TSO, I receive an impression of a man whose orchestral career is shaped by collaboration and the relationships between us – audience and orchestra; section and principal; soloist and everybody else.

Greg has performed with the TSO for over a decade, having started out in his section under former TSO Principal Horn Wendy Page. In a tutti horn position, he could “observe and learn from her about how to play and lead”. Now his role has changed and he’s a principal player, he takes on new responsibilities as a leader with an awareness – with an interest – in what his section needs.

“That’s been a new learning experience for me,” Greg says. In their section, a musician can “go along with things. But now, I’m being in the front seat and making the decisions – so it’s a lot more responsibility both on stage and behind it”.

Those responsibilities range from administrative through to artistic. Though you will watch him perform as an instrumentalist, what you don’t see is his rostering of players, consideration of upcoming programs, rehearsal planning, and the necessity to understand how his fellow musicians approach their high and low parts when they are divided.

“My aim is to try to put myself into other people’s shoes, and see it from there.”

To do this – whether taking on the role of principal, or TSO conductor as he sometimes does – Greg asks himself: “How would I feel, being a player in this situation?”

“That would affect the way I make a decision about something.”

When Greg tells me this, it strikes a chord. There’s something touching about knowing that – despite the range of responsibilities that come with a leadership role in an orchestra – artists like Greg still shape their decisions based on the needs of the team.

The reason this hits me as remarkable is because of the intense pressures that come with a career in the music industry: the high or “perfect” standards against which a musician will judge their work; the countless hours dedicated to practice and rehearsals, even when life gets in the way; the anxieties surrounding live performance in front of hundreds (or thousands) of listeners at once.

In this way, we can understand how a team led with empathy may contribute to a friendly and supportive work environment. That’s something we all need, isn’t it?

“I’m constantly thinking about that,” Greg says. “Because performance can be a stressful thing. So it is a lot about reducing that stress, and making the situations as comfortable as possible for whoever’s playing.”

A stressful experience, certainly. “But it’s also a great one,” Greg adds.

“It’s about finding a way of being encouraging. Of course, there are different ways we can do that within ourselves and the orchestra during rehearsal periods: supporting each other, or congratulating each other in the breaks, or if someone’s done a solo. 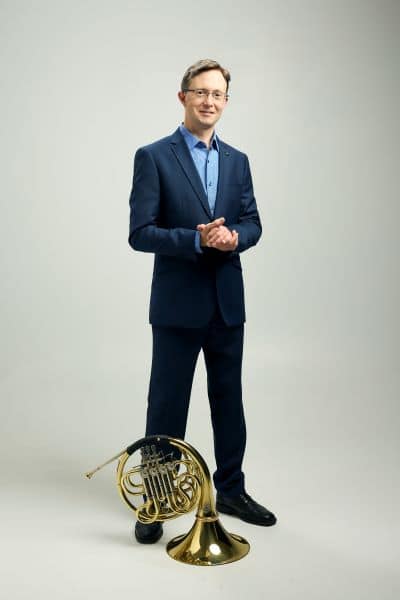 A week after our conversation, Greg will perform the Richard Strauss Horn Concerto No. 2 in E-flat. He will stand as soloist before the orchestra and audience, and know that he is supported.

I ask Greg how it feels to practice the concerto – a comparatively solitary activity – when his approach to music seems so collaborative. I quickly realise my ignorance when he describes the process, which is not really isolating at all. Greg has rehearsed with TSO Pianist Jennifer Marten-Smith (“she’s so adept at helping where the help is needed”). They’ve played it together for TSO staff in advance of the big event. And the concerto itself is akin to chamber music, which brings players together in intimate musical settings.

“That’s part of what I love about this piece – you’re not in the limelight all the time. You get to play alongside the other instruments in the orchestra a lot,” Greg explains.

“Of course, it’s still a solo – but it’s being almost within the orchestra, rather than outside it, as some concertos can be.”

There’s another connection to this piece for Greg, and that’s the one he shares with his former teacher. He learnt this concerto during his days as a student at the Sydney Conservatorium of Music – the first concerto he played in university – and he warmly recalls his time studying with horn tutor Campbell Barnes. (Campbell can’t attend the concerto in Tasmania, so Greg has invited him to watch the live stream.)

When Greg reflects on the milestones of his career in music, and his moment as soloist, Greg feels as though he has come full circle.

“I had the option of giving TSO Director Artistic Planning Simon Rogers a list of pieces [for my concerto performance], and this was right on the top of the list – by a long way. Because it’s a piece that’s stayed with me, ever since that time as a student.

“Finally, being able to play it with an orchestra – with my orchestra – is probably the best thing that can happen.”