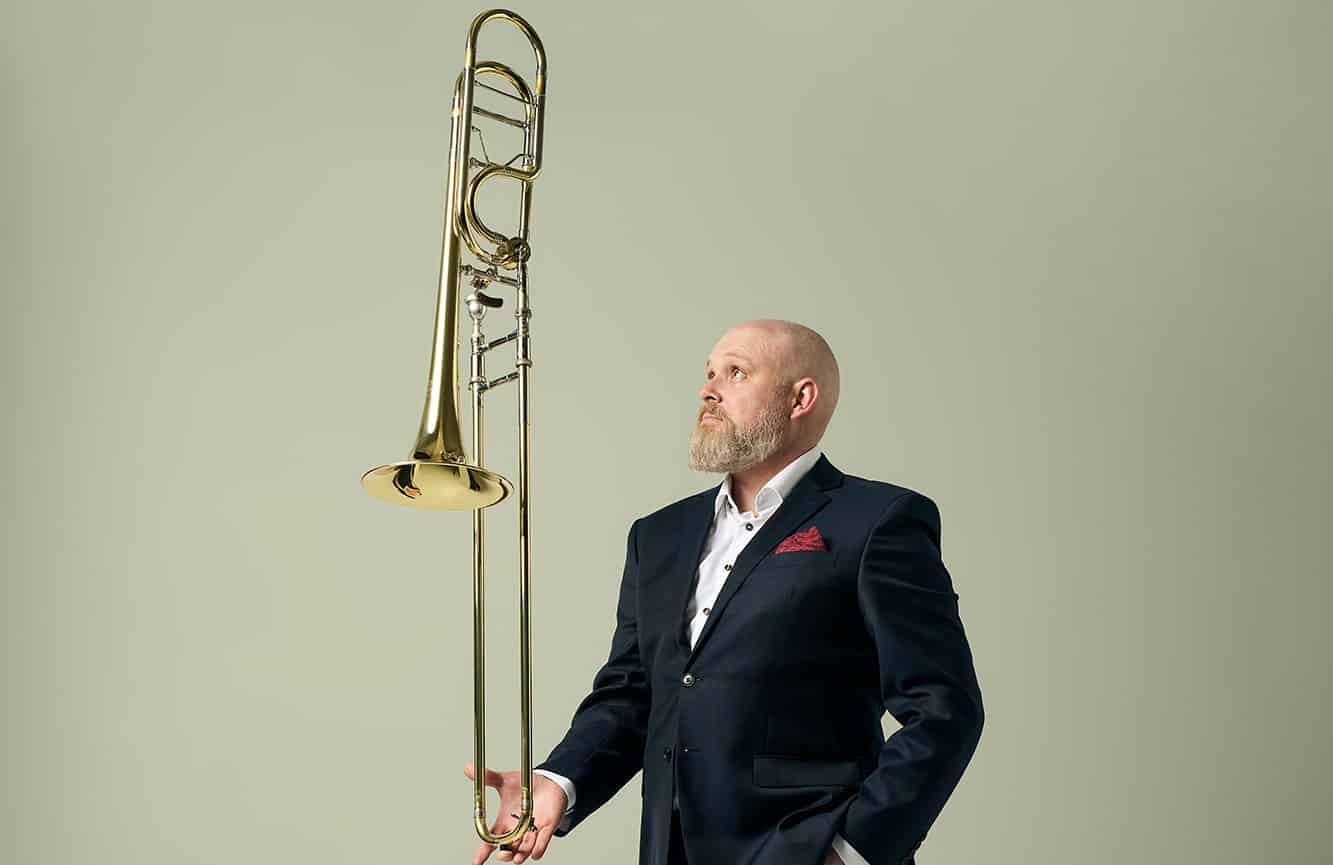 Sit down with a soloist: David Robins 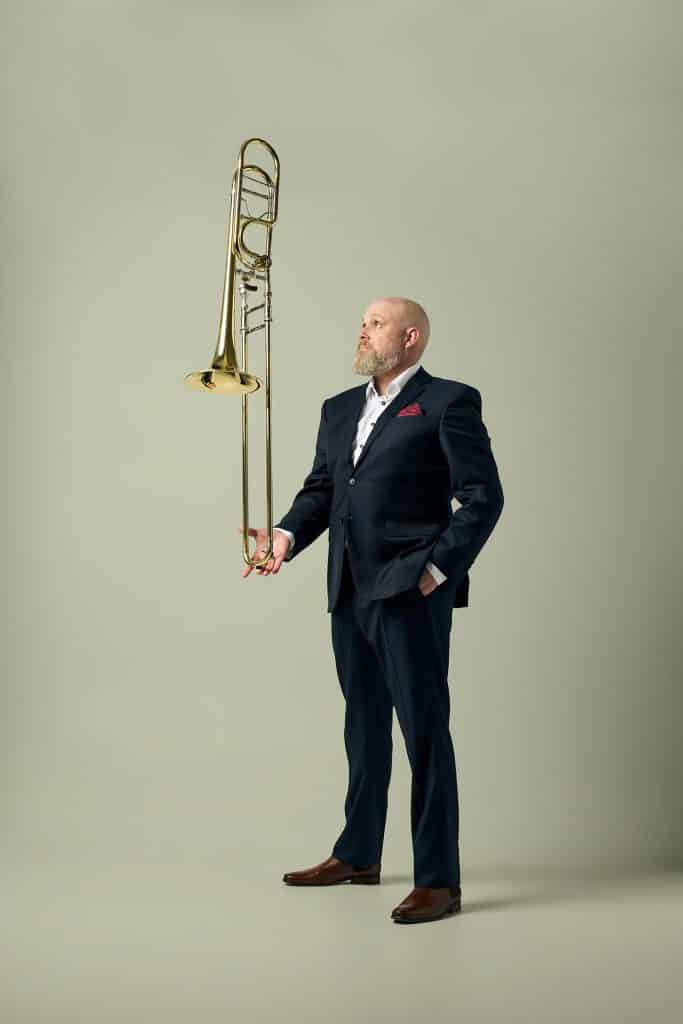 The trombone is an instrument that powers the entire orchestra. It booms through Beethoven symphonies, conjures Wagnerian storms, and floods the concert hall with the sounds of Tchaikovsky.

Yet for all its might, you rarely hear about its abilities as a solo instrument. When I confess to TSO Principal Trombone David Robins that I’ve never seen a trombone concerto performed live, his response is compassionate – and not entirely unpredictable.

“I wouldn’t feel too ashamed,” David says. “I doubt you’re the first to admit that!”

The Tasmanian musician takes centre stage in July’s Tomasi Trombone Concerto – a rare solo event that “truly shows what the instrument is capable of melodically”.

“It contains some serious and darker moments. But generally, it's an exciting and fun work – and a great stepping-off point for those who may be unfamiliar with concerti for the trombone.”

Is solo trombone more popular than we know?

David will enlighten TSO listeners who aren’t particularly familiar with music for solo trombone. But he’s also keen to address some commonly held views about how popular this low brass instrument really is.

“My theory is that the misconception has stemmed from an oddly long-held belief that there isn't a lot of solo repertoire available, which is a nonsense statement,” David says. He cites Classical-period concerti that composers such as Wagenseil, Albrechtsberger, and Leopold Mozart wrote for alto trombone. Later in the 1800s, David adds, tenor trombone became more popular.

Today, he estimates there are hundreds of concerti for the trombone – and demand for this solo instrument is growing.

“The past 50 years have seen the trombone really gain ground as a solo instrument within the orchestra, and the list of works, soloists, and composers is truly immense,” he notes.

“There have even been composers from the film industry collaborating with soloists – names such as Nino Rota (The Godfather Trilogy) and Tan Dun (Crouching Tiger, Hidden Dragon).

“We may not be able to do double stops like on a stringed instrument, but I challenge anyone to go and listen to the third movement of Derek Bourgeois’ Trombone Concerto and tell me we can’t be virtuosic!” 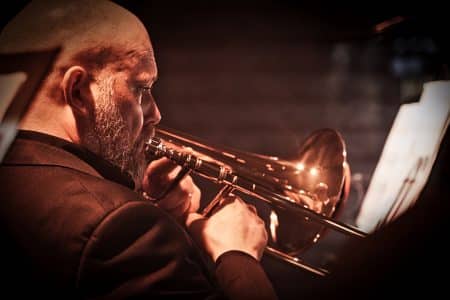 To children, the trombone is that shiny instrument making all those funny sliding noises. To grown-ups, though, it’s a sensational and complex instrument belonging to the brass section. The player’s lips send air vibrating through the mouthpiece and into the tubes; with no keys, the sliding mechanism alters the pitch to induce glimmering melodies out of the bell.

David was still a kid in Queensland when he tried out the trombone, and his first thought upon seeing it was: “What is this thing?!” He was in Year 5 – the age at which many students in Australia learn an instrument through state school music programs.

“One lunchtime, my classroom teacher – who was obviously tasked with divvying up the instruments to her students – found me in the playground and announced rather definitively: ‘David, I think you should learn the trombone!’

“I distinctly remember my response: ‘Okay. What’s a trombone?’

“Next thing I knew, I was on my way home in the back seat of the family car, with this strange-shaped case on my lap. There was a feeling of sheer excitement that I think only a child can experience when being trusted with something new and apparently important.

“If only someone had warned me how much practice I was going to have to do.”

And so it began. David practised his way through studies at the Queensland Conservatorium of Music and Royal Northern College of Music in Manchester. It quickly paid off: during his time in the United Kingdom in the mid-2000s, David performed with BBC Symphony and Philharmonic orchestras among a string of others. Then he returned to Australia in 2008 to freelance with most of the nation’s major state orchestras.

David’s role as trombonist with the Tasmanian Symphony Orchestra commenced in 2013; he is now principal, and spends the rest of his time tutoring young players on their own journey through the University of Tasmania Conservatorium of Music and Island Brass Academy.

“I love every opportunity to perform as a soloist,” David says.

“I’ve had a number of wonderful moments throughout my career so far, where I’ve been able to stand and play for a receptive audience. I think that’s why we do what we do as musicians; the exchange of energy between a performer and a room full of people that creates something truly special.”

A highlight for David was when he stood and performed in the Royal Albert Hall (“sorry for the name drop,” he adds humbly). Now, he will stand in the Federation Concert Hall with the Tasmanian community there to watch him. The program is a vibrant one: Respighi, Ives, Copland, and the highlight concerto from Tomasi.

“I’ve always felt that the Tomasi concerto can be best described as three separate musical snapshots of Paris,” David says.

Composed in 1956, it begins with a range of feelings he describes as “lyrical”, “dramatic”, and “mystical” – a little bit like a masked ball. Its second movement is a nocturne with a hint of the blues. As for the energetic third movement, you can expect “a vivid picture of a bustling Paris in the early to mid-20th Century”.

The colourful work marks a continuation of the solo events placing TSO players front and centre. When the pandemic began, and visiting soloists couldn’t travel to the island, the orchestra started looking inward to the abundance of talent among its own players. In 2022, David’s brass colleague Greg Stephens (Principal Horn) performed the Richard Strauss Horn Concerto No. 2 in E-flat – his first time playing the work with an orchestra. Over in the woodwinds, Principal Clarinet Andrew Seymour presented the Weber Clarinet Concerto (you might remember his face on roving inner-city buses before the event). 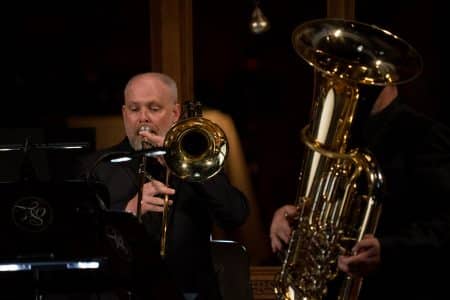 Such celebrations of TSO players – from soloists through to intimate chamber groups and sectional highlights – David reckons is “fantastic”.

“Not only does it allow us to perform some of our favourite works, it offers something to concertgoers that they may have never experienced before.

“It’s also an important reminder that although our primary role is to perform as part of the orchestra in support of a soloist from across the pond – something we’re all looking forward to, with travel restrictions easing – there is still myriad talent right here.”

After the final notes of his Friday night solo performance, David plans to raise a glass with friends, loved ones, and his TSO family – “then no doubt fade very quickly and have to go to bed”.

Over the weekend, after his 5-year-old wakes him up, he’ll take one of his regular trips to the local farmer’s market, handpicking fresh produce and supplementing the hobby gardening he does at home.

“The trombone will be left at work over the weekend. Then on Monday, I’ll start looking ahead to what’s coming up next in our concert schedule after the mid-year break.”

David hopes that with each concert, you might pop in to say hello.

“The simple truth is you probably know all our names, but it’s much harder for us to learn all of yours!”

To read more interviews with TSO players and leaders, stay up to date with our news.