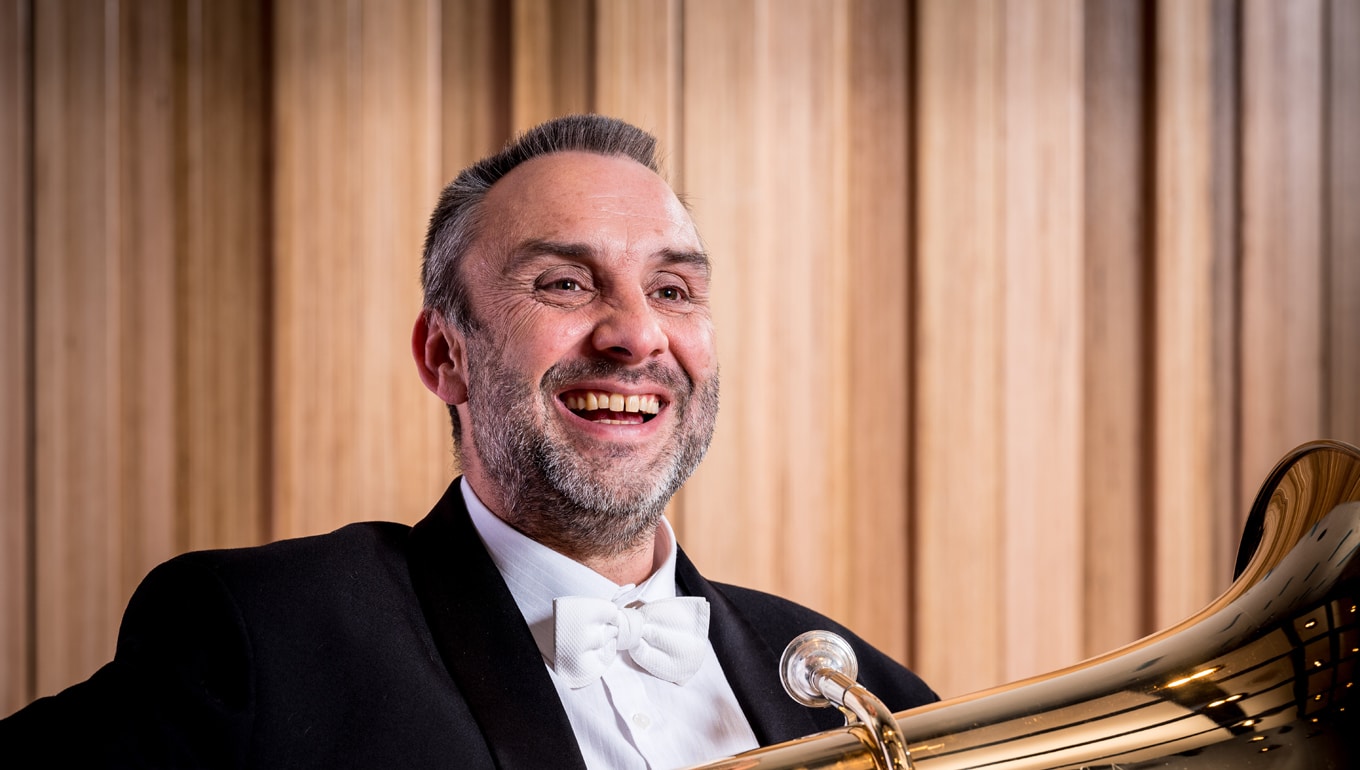 Do you know our Principal Tuba, Tim Jones, is a composer?

Thanks for chatting with us Tim!

We’d love to hear how your journey began. Did you choose the tuba, or did it choose you?

I was fortunate to be at Doncaster Primary School in Melbourne in Martin Arnold's grade four class. He introduced me to the recorder, as he did with the rest of the class. I was obsessed with large things at the time, in particular trucks. Descant recorder awakened my love of music playing. Descant then morphed into the tenor recorder (bigger) in the after-school recorder ensemble. Next thing I know I was offered the chance to play in Mr Arnold's rag-tag primary school orchestra. The choices were the tuba - which he was pushing - oboe and french horn...  I took the big one. The rest is history.

Tell us about your piece The Mountain. How did it come about?

A few years ago my chair sponsor, the extraordinary Dr Marie Heitz, commissioned me to write an original piece for solo tuba and community band low brass ensemble. Regretfully I had a year-and-a-half backlog of arrangements to complete. One fateful day nearly 18 months later, I was celebrating her birthday with her and her husband David Boyles. I happened to have my decks clear and had decided to become a "composer" having spent a long apprenticeship arranging music. She grabbed the bull by the horns, and I was presented with a brief for a piece called The Mountain. So good was the brief and the timing, and the ensuing collaboration (her concepts/my music) that in no time it was complete.

I can't express my gratitude enough to my good friends Marie and David. The public have enjoyed the piece twice now and the second performance led immediately to another commission from elsewhere to write a piece for 12 trumpets, timpani and two well renowned trumpet soloists, one of them being a giant of the American scene.

Did you intend to create a piece that was heavily influenced by place, or were you inspired during the process?

Place... kunanyi/Mt. Wellington, the New Town Rivulet (my happy place where me and my dog walk regularly in the foothills), the wind gusts that batter my house at times, the flora and fauna of Hobart that I love and finally the people of greater Hobart, my favourite place of residence.

Process…Marie's brief mentioned above. The only bit that differs is that the flora and fauna is depicted as a single eastern barred bandicoot.

What has been your favourite moment in this process?

Performing the piece with my wonderful colleagues, hearing that people "loved it", and that it reminded them of what we were depicting.  It seems to trigger people’s imagination and pride of place. Curiously, everyone’s interpretation differs depending on where they live and which aspect of the mountain they have an affinity with. The creative process itself pleased me immensely but there is always the nagging fear for me that an audience won't enjoy it.

Will we have an opportunity to hear more from you in future?

Yes, if I can find audiences - for music is not heard otherwise!  I am writing like someone possessed, as I have worked towards being a composer for years. There are over 20 minutes of orchestral works in the pipeline, including a tuba concertino I envisaged two decades ago that is nearly ready to print out. It took all that time to gather the skills to slowly put it together. Little bits here and there in-between study - arranging for orchestra, bothering my colleagues with questions and recently an intensive session on the piece with Richard Mills, the legend himself.

The other piece exists as a detailed sketch I did for the fun of it during the summer break just passed. Shortly, my collaboration with local poet/artist Karen Armstrong will be videoed and recorded for a social media/YouTube blitz. Look out for "Songs for Rosie" - a suite of 5 songs for mezzo-soprano and piano. Karen's lyrics, my music. I have assembled an all-star local team who are all involved with the TSO in one way or another. You’ll be able to find some excerpts of this work on the TSO Daily Dose.

When you are not performing, practicing or writing, how do you fill your (likely limited!) spare time?

I spend time with my family and friends. I walk our pound hound (crazy kelpie type), and I have begun enjoying a bit of pilates which has done wonders for my tuba injuries amassed over four decades. I enjoy the odd "chess night" in a blokey poker game type setting (I live in a house full of females). Gardening is slowly sucking me in, mainly getting rid of weeds and mowing with the odd planting fit. Of late, meditation has been helping me. I "sit" here and there with a good friend who has recently become a zazen novice monk.