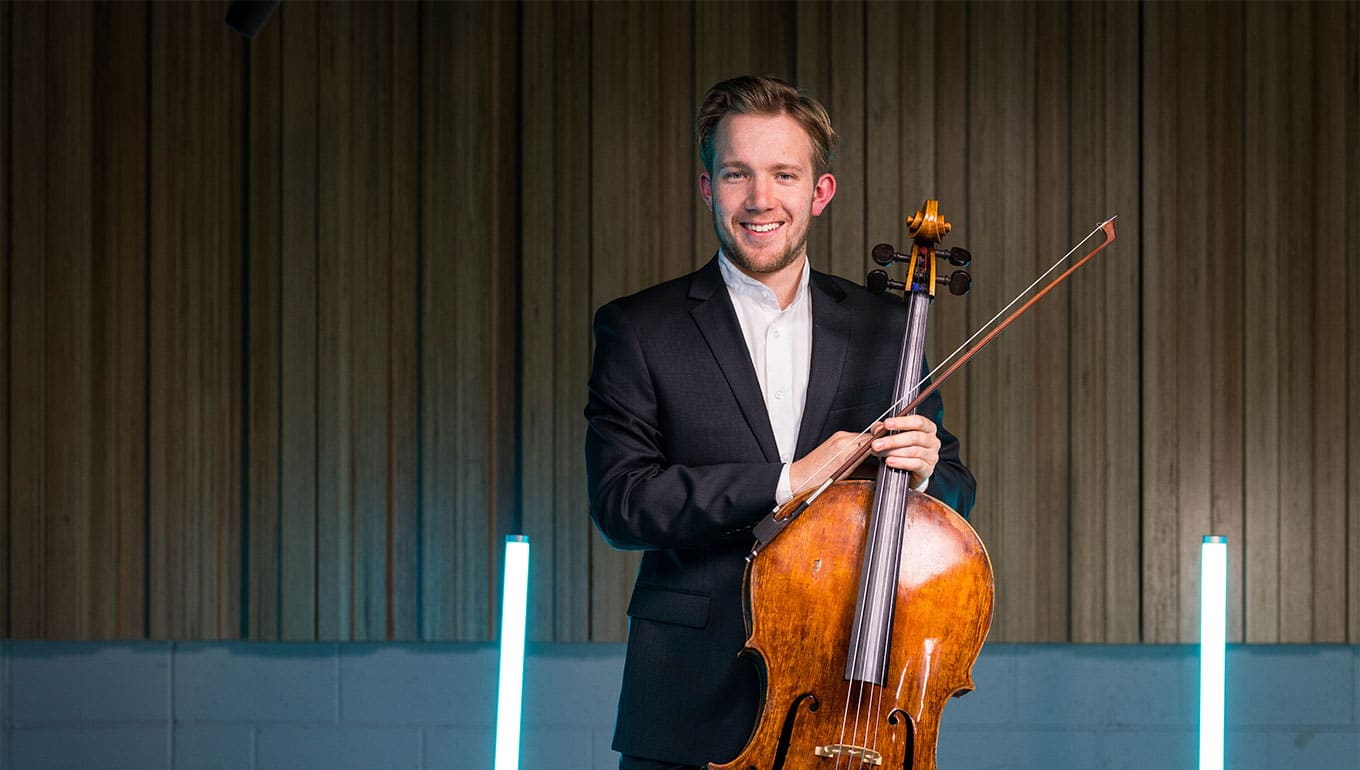 In conversation with Jonathan Békés – our new Principal Cello

There can only be one principal cellist. And in some orchestras, it’s a position that will go up for grabs just once in a lifetime.

The role of Tasmanian Symphony Orchestra Principal Cello was occupied for 33 years by celebrated instrumentalist Sue-Ellen Paulsen. She led her string section through critical acclaim until her retirement in 2019. The position became vacant for the first time in decades.

Not all classical musicians have the desire to become a principal player of their section – a leader within the orchestra. But cellist Jonathan Békés did. He was prepared to give this rare opportunity his very best shot.

“A principal job has been my dream for a very long time,” Jonathan says. “But, in such a competitive industry, it has always been a daunting prospect.”

The rising star first moved to Tasmania in 2018 for a tutti cello position – during which time he’d “well and truly fallen in love with the place and orchestra”.

“When the opportunity to go for the principal position came up, I went at it with everything I had.”

It paid off. On 26 April 2021, the young musician was announced as the new TSO Principal Cello.

“I’m just so relieved to have landed the job after so much work,” Jonathan reflects. He refers to the work he did in the lead-up to his audition. But the audition itself was a culmination of his many years spent studying, practising, and performing – all to an impeccably high standard.

Wherever the music takes him

Jonathan started his musical journey at just 5 years old. Raised in Sydney, his mum taught him piano (“I gave that up as soon as I had to practice scales – as you do,” he grins).

At 10 years old, Jonathan picked up a bow instead, finding a stronger connection to an instrument he would continue into adulthood: the cello.

Jonathan has always been quick to travel to wherever the music demands. He studied at the Sydney Conservatorium of Music, then moved to Melbourne to learn with internationally renowned musicians through the Australian National Academy of Music. The cellist relocated once again to a new city when he scored his tutti job with the TSO.

Between these major events of his music career, Jonathan has toured Singapore and India with the Australian World Orchestra – and Asia, Europe, and America with Estivo Trio, of which he is a founding member.

“Having the opportunities to perform so much in so many different situations builds one’s playing to a state of being ‘bulletproof’,” Jonathan shares.

“I never really had to time to worry about the doubts because I had performances coming soon and I needed to practice.”

A natural leader in classical music

Not much can prepare a musician for how it’d really feel to land their dream job. Still, Jonathan had a pretty strong training ground: he accumulated early career experiences that have helped him prepare for this bold new leadership role. Impressively, he played as principal cello with the Australian Youth Orchestra, Sydney Youth Orchestra, Momentum Ensemble, Musician Project, and Australian International Symphony Orchestra Institute.

“I owe a lot to my time with youth orchestras,” Jonathan says.

“They’ve taught me a lot along the way. And the lessons I’ve learnt certainly give me a lot more confidence in my new role – things like knowing what to say and when to say it, knowing how it feels to have that big cello solo looming up in 10 seconds and you’ve just got to go for it, having the practice at listening across the orchestra and working with different conductors, as well as just being exposed to so much of the orchestral repertoire.” 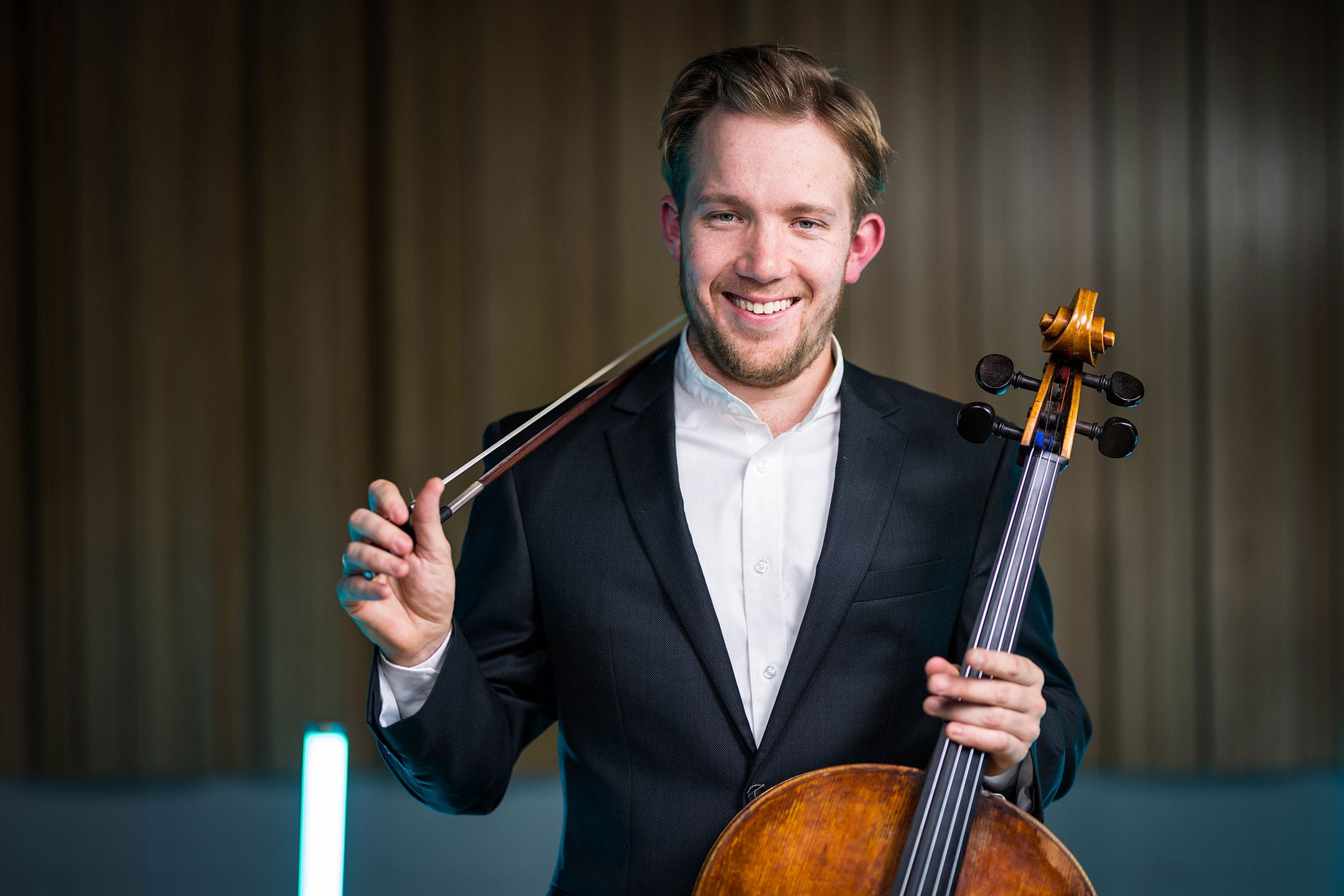 Lifting his fellow players into the spotlight

The role of principal cello is as much about leadership as it is about performance. Though Jonathan must be at the top of his game as an instrumentalist, he must also inspire his fellow cellists to perform at their best, too. Together, they work with all sections of the TSO to shine as an “orchestral whole”.

“I’ve generally felt that a leadership position could suit me,” Jonathan muses.

“I feel that I’ve always had a strong musical voice, and I really enjoy working alongside people and getting the most out of them.”

On a practical level, it will come down to his ability to communicate with the players around him. First, Jonathan will work with other string players to organise bowings. (If you’ve ever wondered how string players move their bows in a synchronised action, you may appreciate the planning that goes on behind the scenes.) After this strategic process, Jonathan and the players will get stuck into rehearsals.

“In rehearsals, it’s the principal’s job to interact with the conductor and other sections on behalf of their own,” Jonathan explains.

“This includes suggesting musical ideas, organising practicalities, as well as active listening and interaction while performing.

“The principal is also there to unite their section’s musical ideas, to show where notes will be placed, to gesture musical phrasing, and to make decisions when they are needed.”

And at the end of the day, Jonathan still needs to practice the notes and listen to recordings.

“There are certainly a lot of things to listen for and to think about in the moment when performing and rehearsing as principal cello!”

As you might imagine, moving from tutti to principal cello is quite an undertaking (albeit a very exciting one). Even without all the tasks of a principal player, classical musicians face demanding career schedules. Jonathan has also chosen to complement his study and performances with extra work in education, having taught in workshops, masterclasses, tutorials, and as a coach.

“For me personally, I find physical activity essential to my mental and musical wellbeing.”

When he does take time off, Jonathan certainly makes the most of it. He can be found playing golf, squash, or hiking Tasmania’s snow-capped mountains.

“I feel that my best playing comes when I’m doing a lot of things. This does make finding the right balance of music, family, and exercise tricky – but it’s essential and definitely possible!”

Embracing positive culture in the orchestra

Luckily, Jonathan has the support of a generous team as he steps into his new – and perhaps lifelong – career as principal cello.

“I feel that the culture at TSO is its greatest asset,” Jonathan says.

“It is only a small orchestra of about 50 musicians, but this small size means that the connections between people are more meaningful.

“The cello section is just a great group, and we’re really good friends.

“At the same time, the TSO is such a high-quality orchestra that constantly strives for excellence. It’s a great list of quality musicians who are driven to get the best out of themselves.

“This combination is something really special and unique about the TSO, and is what makes me really excited to start as its principal cello.”

Caroline says: “We’re absolutely thrilled to have Jonathan move into this vital leadership role in the orchestra, and we know he’ll continue to thrill audiences with his superb musicianship and charismatic stage presence.”

Gearing up for his first few months in this new role, Jonathan leaves us with some energetic parting words: “Bring it on!”

Visit the Tasmanian Symphony Orchestra’s What’s On page to listen to Jonathan Békés perform live with his fellow musicians, and the TSO News page to read more stories from behind the scenes.