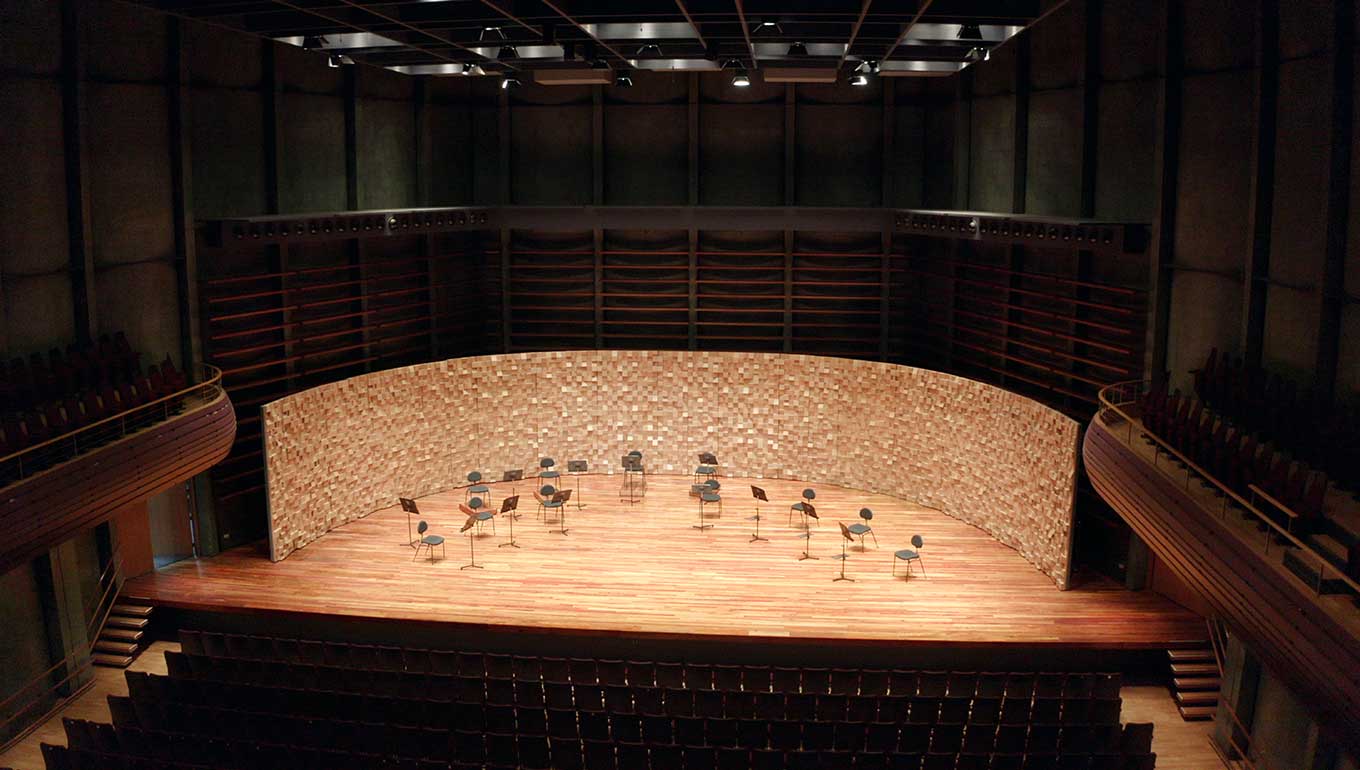 How do you enjoy live classical music?

You might choose your seats based on the view. From the Federation Concert Hall balcony, it’s easy to cast your eyes over each instrumental section, and have your ears follow. You can watch the strings as they move together, or spot a wind player taking a breath before their moment arrives.

Other listeners might close their eyes, allowing the music to transport them away from the hall and into their imagination. And then there are those enjoying concerts from home, sinking into a broadcast or live stream of their favourite orchestra.

There are many ways to indulge in live classical music, but there is one underlying element that can make or break the listener’s experience: the acoustics of the hall.

A concert hall is designed to look beautiful while manipulating the way sound travels through the space. This month, we had a chat with Tasmanian Symphony Orchestra musicians about how they navigate the acoustics of the Federation Concert Hall; we also spoke with Andrew Nicol – the expert who explained the technical side of this year’s major acoustic upgrades.

In this story, we hear from Tasmanian music critic Peter Donnelly, who says acoustics play a “vital role in enabling the music to be heard to its best advantage”.

“Experience of many different acoustics and musical interpretations of a given piece is the key to appreciating what is possible and what tends to work or not,” Peter says.

Tasmanian locals are likely to recognise the name Peter Donnelly: his byline was printed in The Mercury for about 15 years. Peter estimates he has reviewed 250 performances of the TSO in the Federation Concert Hall. (And that’s not including events he’s covered outside the hall – including those taking place in the TSO’s former home, the “somewhat spartan” Odeon Theatre.)

The first Federation Concert Hall performance Peter reviewed was Glinka’s Russlan and Ludmilla Overture. He recalls that, in these earlier events, the exposed concrete in the hall had a tendency to produce “an over-reverberant sound picture” when the orchestra would perform loudly, and that soloists could consequently become “lost in the texture”.

Then, in 2009, the hall had its first big acoustic upgrade: a freestanding soundboard positioned behind the players. This screen, jutted with wooden squares that look a bit like pixels, served audience and player alike. According to Peter, musicians could better hear one another, and listeners could enjoy a solo melody with greater clarity.

The 2020 upgrades are a continuation of the original plans for the hall, introducing variable acoustics – the ability to change the level of reverberance in the hall to match the piece, whether it’s a symphonic or chamber work. As Peter muses: “It will be fascinating to evaluate the results.” 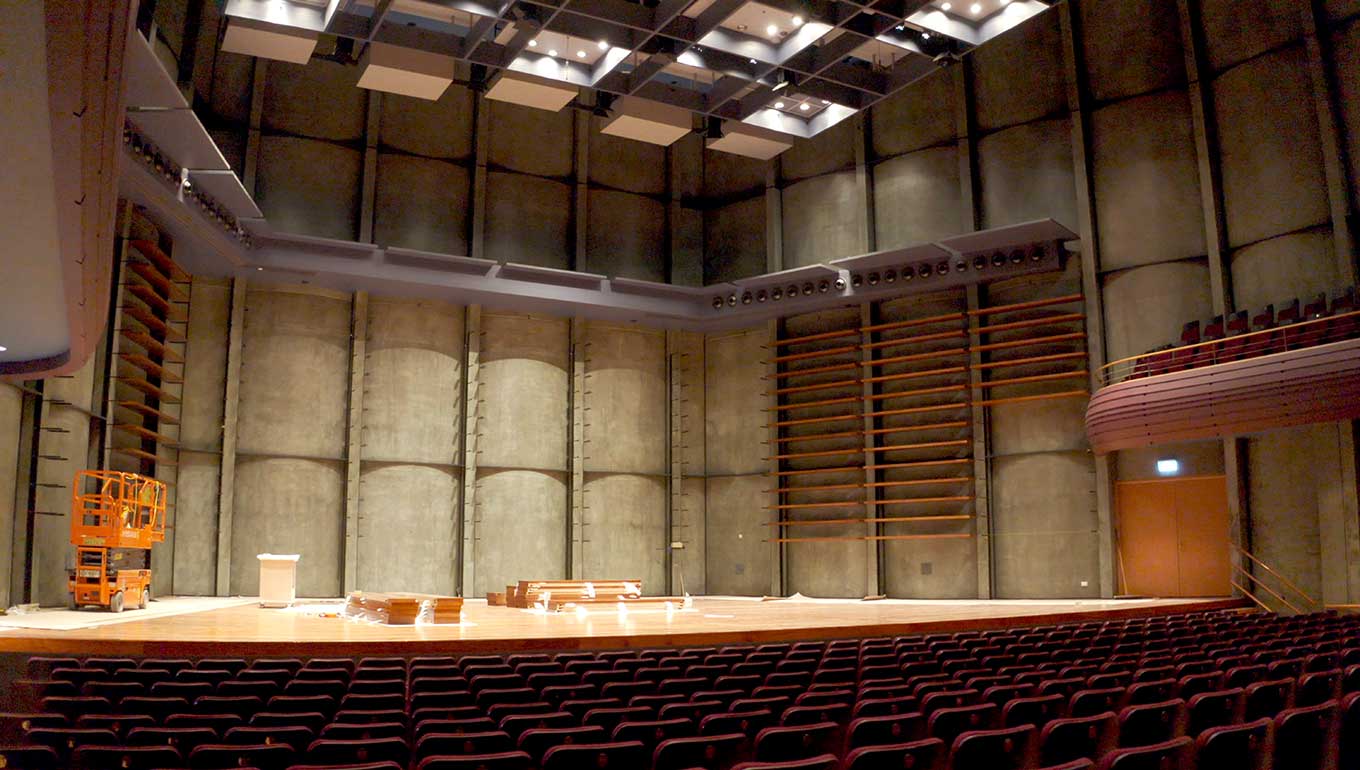 Peter has travelled the world listening to classical music, and his experiences have shaped his expectations and interpretations of live performance. He even attended the TSO’s 2016-2017 China tour, hearing familiar players in new concert halls and acoustic environments.

In Hobart, the veteran critic has also observed world-class conductors who visit the Federation Concert Hall – each bringing their own unique approach to the music. After all, an orchestra can still exhibit a distinctive character within any hall, and a conductor can work to master their acoustic environment.

“Good conductors seem to carry with them their own ‘sound’ in relation to a particular composer’s style,” Peter says. On a practical level, Peter has noticed conductors rearranging players’ seats and guiding their dynamics in response to the hall’s acoustics; sound engineers achieve a similar level of variation through their microphone placement and mixing techniques.

As the most experienced classical music critic in Tasmania, Peter certainly has a discerning ear for acoustics. But it doesn’t necessarily take years of training to enjoy live performance; it simply takes an active listener to be mindful of the way the sound carries the music.

“I think that people who love music and attend concerts regularly inevitably bring their own knowledge, experience, biases, likes, and dislikes to bear on what they hear,” Peter says. “The subject of acoustics is one factor in the mix.”

Peter is likely to be the first critic to review the TSO in the upgraded Federation Concert Hall. On the occasion, he’ll be “attempting to assess to what degree acoustic improvements result in increased enhancement of the concert experience”.

But what will you listen for?

If you don’t know where to start, Peter has a number of tips that may help open your ears, so you can actively engage with the new acoustic environment. First, listen to your favourite recording of a live performance; or retrieve one from your memory. Try to recall what it sounded like. Then, when you’re attending your next live performance, compare the nature of the sound. What differences do you notice? What are some of the strengths that shine through? What do you like about what you hear?

We’ll leave you with some of the elements Peter looks out for when he’s attending a live performance. We’d challenge you to make your own list, too!

Learn more about the Federation Concert Hall’s 2020 acoustic upgrades through our TSO News, and on Facebook.