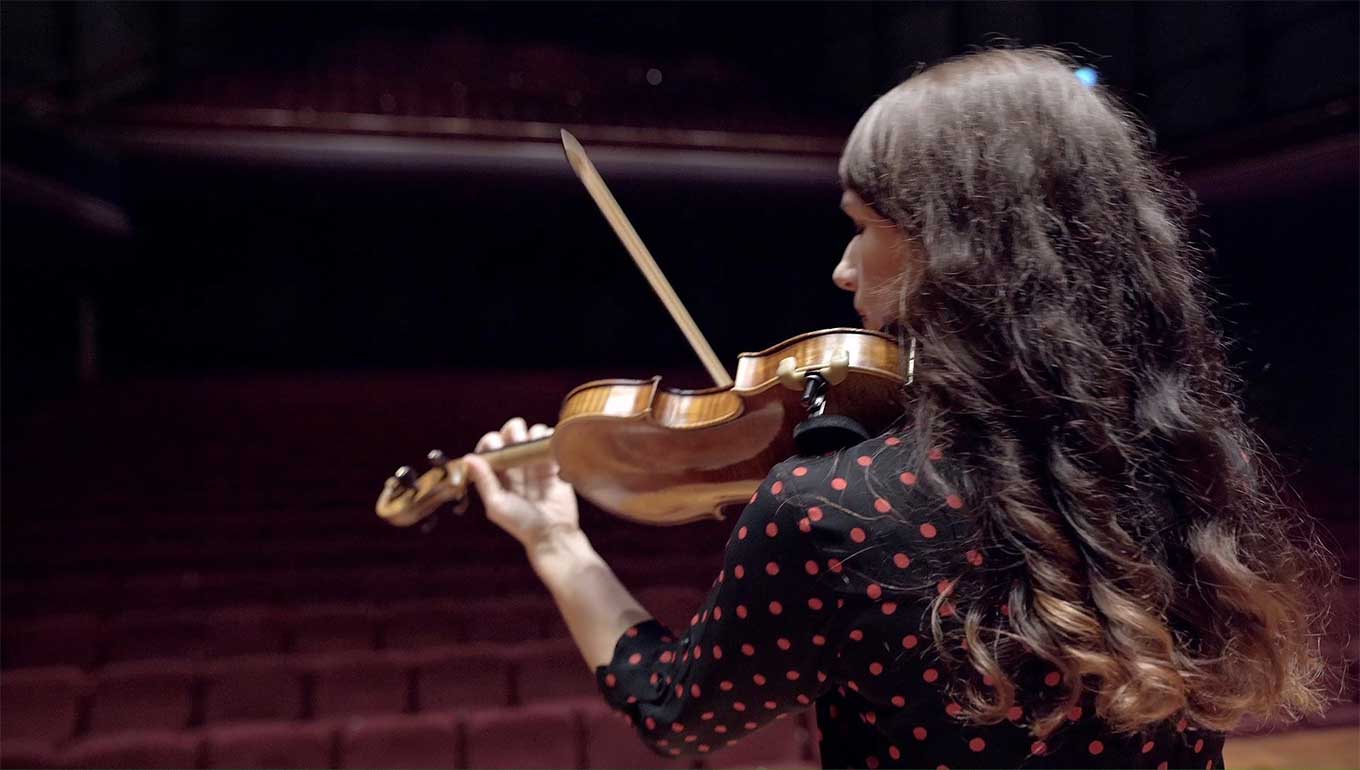 “I had a 6-month-old baby and a 2-year-old. They were both waking up multiple times in the night, and I was still breast-feeding,” Emma says. “It was winter, and we were staying in a small cottage in Battery Point. The wind would howl outside in the middle of the night.”

It’s understandable that her memories of this audition period are “hazy”, despite the enormous amount of work she needed to prepare for the chance to lead this world-class orchestra.

“I really wanted the job, but I also didn't have time or energy to be nervous or to overthink.”

Along with Emma, each TSO musician has an audition story of their own. All players have, at one point, beaten the odds – working through personal challenges or fears to achieve their career goal with success. After all, auditions aren’t tailored to suit the lives of their candidates: these players must turn up on time – awake or sleep-deprived, calm or nervous – to meet the strict demand of presenting their very best performance.

After her audition back in 2016, Emma was accepted into the TSO. The concertmaster has since led the orchestra through major series events at the Federation Concert Hall, chamber music concerts at Mona, and ensemble playing at intimate local venues with TSO Live Sessions – just to name a few. These days, she returns to TSO auditions from the other side of the floor, listening to aspiring orchestral musicians as they present her with their own styles of playing.

Emma knows first-hand it’s not an easy process, and pressures are placed on hopeful candidates as they work through their orchestral excerpts. A blind audition with the TSO will usually take place before a panel of about nine people, and that’s just the beginning. An orchestral musician might listen, and there are others in the room, too – managers facilitating the audition session, representatives of the candidates making sure everything is running smoothly, and even the concertmaster, chief conductor, or another principal player.

“There is a screen up for the preliminary round, and there is to be no talking from the candidates,” Emma says of these blind auditions. As the rounds progress, the screen is eventually removed for a greater level of interaction between player and adjudicators.

“It's not warm and fuzzy, but I know we try to make candidates feel as comfortable as possible – and I know the people dealing with the candidates 'backstage' also do a fantastic job of creating a calm and sympathetic atmosphere.”

Adjudicators like Emma can empathise with musicians facing a high-pressure and competitive environment. However, at the end of the day, only one player will be selected for a role, and will go on to perform under their probationary period of 6-12 months.

“It's a bit like the Olympics: sadly, you can be the best runner on the track – but if that doesn't happen on the day, you don't win a medal,” Emma compares. “My advice is that people should work on their mental game. There's nothing more disheartening than knowing you are a great player, and wonderfully prepared, but your nerves let you down when the pressure is on.”

Emma is one of the many TSO musicians who featured as part of the new Daily Dose video series. In one of her recorded interviews, Emma spoke about the way the unusual audition set-up can place a musician’s true abilities out of context: performing solo orchestral excerpts is not the same as performing with a full orchestra.

Now, when asked to explain how an orchestra can ever really “know” it’s selecting the right player for its group, Emma expands on this conundrum.

“Playing an audition is essentially a different skill to playing in an orchestra. It is possible to be a fabulous orchestral musician, but not great at taking auditions. This causes immense frustration!

“And yes, when a panel hires someone who has played a great audition, you do not yet know if they will fit in with the orchestra.”

For a TSO concertgoer, it’s hard to imagine that a single player might not “fit”. The standard of this orchestra is world class – a fact listeners can relax into and take for granted, due to the effortlessness projected in concert.

In this way, adjudicators may be considered more than cold and calculating, just waiting for a player to commit an error behind their screen. Though probationary period may help musician and orchestra decide over time if they’re well-matched, the adjudicators first know what to listen for – and it extends beyond the notes on the page and the technical expertise.

“It's very easy to tell when people make tiny mistakes because of nerves. But if you can hear that the overall quality of the candidate is really good, one can choose to overlook some small things in favour of hearing more of that person.”

The matter of context still exists within this more lenient audition framework. A musician will present technically challenging excerpts, and must perform in a way that’s appropriate to the style of composer and era, and consistent across elements such as timing. However, rigid audition structures aside, one must only listen to Emma’s orchestral excerpt to hear that candidates are nevertheless capable of expressing their creativity. Emma says that it’s “possible to play beautifully, musically, and imaginatively” – words that can be applied to her recording, too.

Emma’s Daily Dose videos feature orchestral excerpts by Grieg, Mozart, and others, performed in the style of an audition – but not to a panel of adjudicators. Instead, she performs to hundreds of musicians and concertgoers alike, who have tuned in to the Daily Dose from their own homes. In effect, Emma’s mock-audition video becomes more of a solo performance for the world to enjoy.

Speaking on the way a player must change approach according to the purpose of their music-making, Emma says quite simply: “My intention is always just to play great music – to the highest standard I am capable of – and communicate through music. I don't think much beyond that!”

Her videos are well structured to include an interview and her performances. We can imagine that hour upon hour of practice must have been poured into every note – not just for this Daily Dose video, but for past auditions and performances of these pieces of music.

In contrast, “the talking bit wasn’t calculated or even prepared at all”, which reveals the candid nature of the discussion between the two players. The Daily Dose initiative is mostly voluntary for TSO players, who choose to jump on board to discuss and make music in an entirely new way. This offers the chance for these musicians to maintain their “technical chops, imagination, and chamber music sensibilities” – as well as the confronting opportunity to watch their own performances, for once!

“I've had a few conversations with musicians who have noticed things about their playing and posture that they'd like to improve. I've definitely got a list of things to work on that I wouldn't have been as aware of, if it weren't for the myriad videos I've been a part of since March.”

Beyond her own experience with the Daily Dose, Emma hopes sharing her audition knowledge might help others in their own music careers.

“If I can help even one person to be on their way to reaching their orchestral and professional goals, it would make me very happy,” the violinist says.

“I admire anyone who takes an audition, whether they win or whether they play for seven minutes and go home. It's a marathon – and the only sure way to make sure you don't win is to give up!”

Watch TSO Concertmaster Emma McGrath’s audition videos and others in the Daily Dose series on our website. Learn more about the Daily Dose through our interview with TSO Content Manager and Special Projects Curator Robert Gibson.

For more about auditions, TSO Director Operations Jacqui Walkden takes you further backstage in this Q&A.