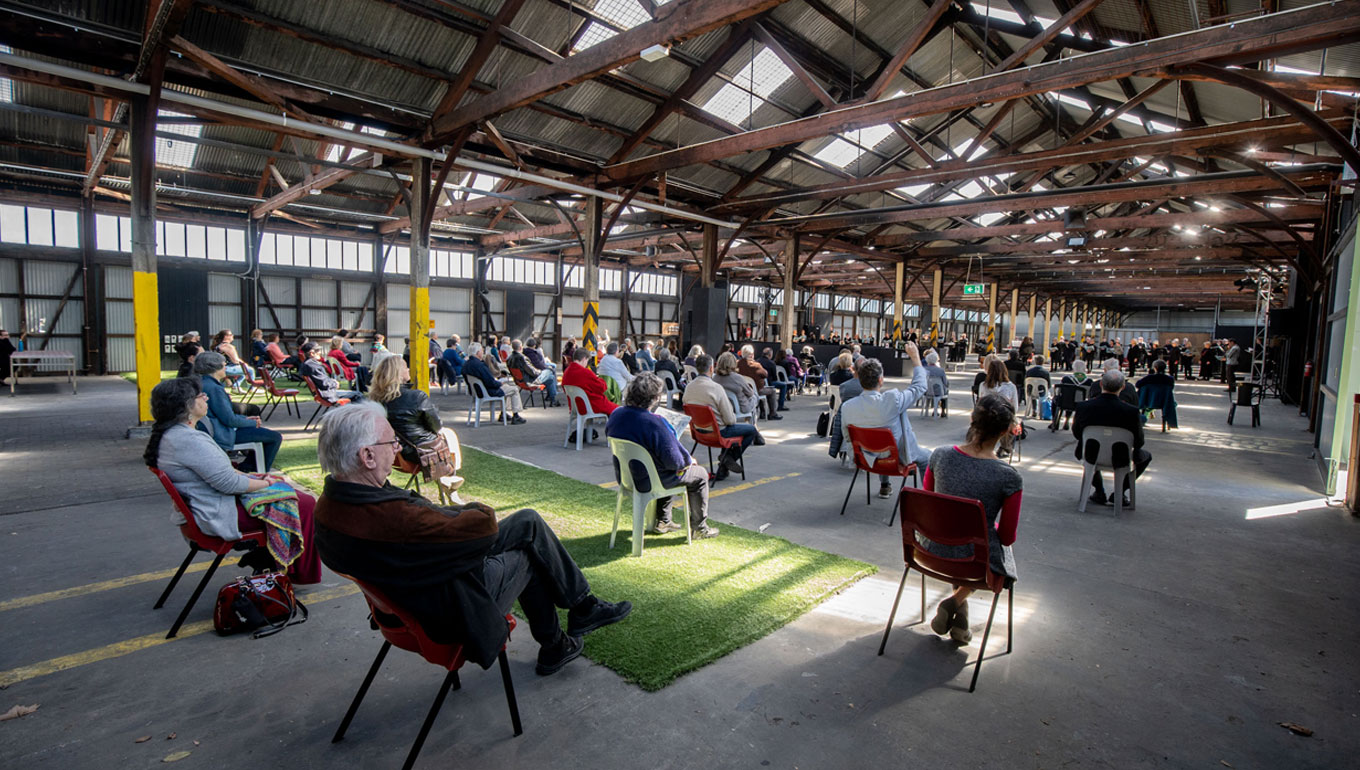 In ‘Isolated Songs’, our choristers sing about their wants, needs, and dreamsBy Stephanie Eslake

“Hey, can you write me an email and tell me your deepest feelings, even though you’ve never met me?”

It’s probably not the sort of question you’d like to receive. But composer Ben van Tienen wanted to get to the heart of the TSO Chorus, and learn about how its members were really experiencing life under lockdown.

He knew he couldn’t ask something quite that confronting, so instead he decided to send a more thoughtful series of prompts – I wish, I want, I dream, I need, I pray, I try to be.

The answers he received were so moving, he composed them into the first movement of his new work Isolated Songs.

Ben’s work was performed alongside composer Lisa Cheney’s Go Back and Start Again in Shedding the Silence: an intimate performance in Hobart’s heritage venue The Goods Shed. This socially distanced, invitation-only affair may have been smaller than the TSO Chorus’ usual full house at the Federation Concert Hall – but there are two things that made it very, very special: firstly, it marked their first concert since the pandemic cancelled this year’s TSO program. Secondly, the choristers sang about their own hopes and dreams, using their own words, in music they helped to create. 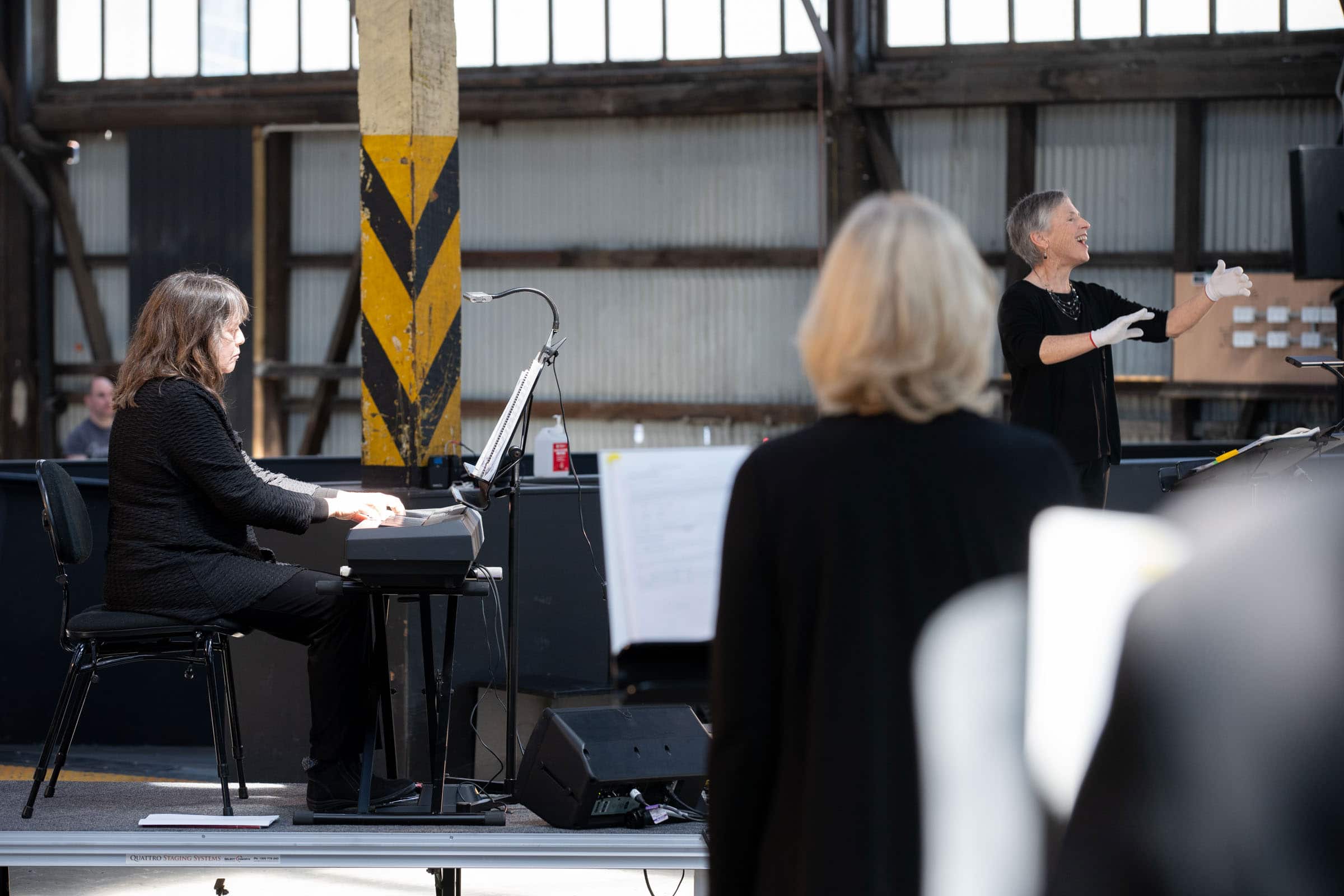 Ben started working on the four-part Isolated Songs in the early stages of lockdown. Though he’d previously been associated with the TSO Chorus as a chorister and repetiteur, Ben is now based in the United Kingdom. Throughout 2020, Ben has observed new cases of COVID-19 increasing by the thousands. It was within this environment that he pledged to himself he would do a little bit of writing every day, allowing himself to compose in challenging times without the pressure of perfection.

Less than one week into his new routine, TSO Chorusmaster June Tyzack and Director, Artistic Planning Simon Rogers emailed the composer to discuss a new commission.

“I came back with a pretty detailed proposal about what I intended to write, and once they approved that, I got to work in earnest,” Ben says.

Though he hadn’t intended to do so, Ben continued to use email as a primary tool in the creation of his new composition. He knew he wanted to make music about how people were experiencing lockdown – but in these early stages, it was nothing more than “a gut feeling that was hard to describe”.

When he started involving the TSO choristers in his research, asking them about their own dreams and needs in lockdown, he realised he was onto something deeply meaningful.

“Once I’d compiled all the responses into categories in one file, it became clear that there were some beautiful phrases just begging to be set verbatim.”

The email responses to Ben’s prompts were candid. They didn’t sound like poetry, and they weren’t overtly philosophical. They were real. And, as Ben came to observe, “it turns out we’re all dreaming of the same things”.

As the choristers sang in the first movement of Ben’s Isolated Songs – I wish I want I dream I need:

Had COVID-19 not forced Ben to rely on digital communication with members of the TSO Chorus, his work wouldn’t have made the same impact – not for composer, listener, or singer. The power lies in its anonymity, and Ben remarks: “I think all being in the room together actually could have proved to be to the project’s detriment.”

Still, he did communicate closely with the team, and had a Zoom meeting with June and Simon to discuss the work in its earliest stages. June says: “Working closely with artists enables composers to get ‘inside’ the instrument.”

When commissioning and working with a composer like Ben, June likes to start with the brief, which contains practical details such as the venue and context of performance, the work’s length and text, and the nature of the TSO Chorus itself.

In this instance, the music was not only composed to bring out the technical strengths of the chorus, but its very soul.

“I feel so fortunate to be in a creative arts field that marries instrumental music with the music of the human voice; adding all the expressions of humanity to wordless music that, in itself, is capable of making you weep or laugh or explode,” June says.

Of Isolated Songs, June feels that Ben approached the experience of the pandemic with sensitivity – and “in a style that won’t add more trauma and uncertainty”.

“Within the four songs, Ben lets us sit in the moment and sing about simple things – cats purring, plants rustling in the wind, and silence broken by the stork landing on the roof,” June notes.

“This new project brought with it an injection of enthusiasm in quite a sombre time, and the flavour of the first of four songs – inspired by deeply personal reactions to isolation – brought a level of engagement quite rare in new works.”

In Shedding the Silence at The Goods Shed, the TSO Chorus also performed Lisa Cheney’s work Go Back and Start Again, which had itself involved collaboration with the choristers.

“It is a coincidence that both composers chose to invite thoughts and texts directly from the choristers,” June says.

June had approached Lisa to compose a new piece of music which the TSO Chorus could perform on its tour of Europe in 2019. But the goal shifted as Lisa’s composition was instead premiered at Mona Foma in January of this year.

Of her composition, Lisa says: “June was great at offering plenty of stimulus for the commission, and asked me to consider how it could fit in with the concert theme of ‘time’.”

As part of her creative process, Lisa asked the choristers what they would do if they had access to an unlimited amount of time – and what they feared about losing the time in their possession.

“I loved working within these parameters, and wanted to involve the choristers as much as I could to make it an enjoyable process,” Lisa says.

“By asking them questions about the theme, I was able to turn their answers into lyrics with their permission.”

In its premiere, the music was memorised and performed in total darkness. To Lisa, involving the performers in the composition process can bring benefits to the entire artistic team.

“I hope that it makes the learning of a new work more meaningful and, as in our performance context, easier to commit to memory.”

As the TSO Chorus returns to sing for live audiences, its members will remain united through their shared memories of the pandemic. With compositions like these, human experiences are documented, and will provide future singers and listeners with an honest representation of this unique moment in history.

For Ben, these living compositions can also provide us with hope.

“I’d like to think that these songs might help us consider our shared humanity. The writing of them has done that for me; I can only hope that the singing of them, and the listening to them, has a similar effect. If it does, even in some small way, I think we can all be really proud.”