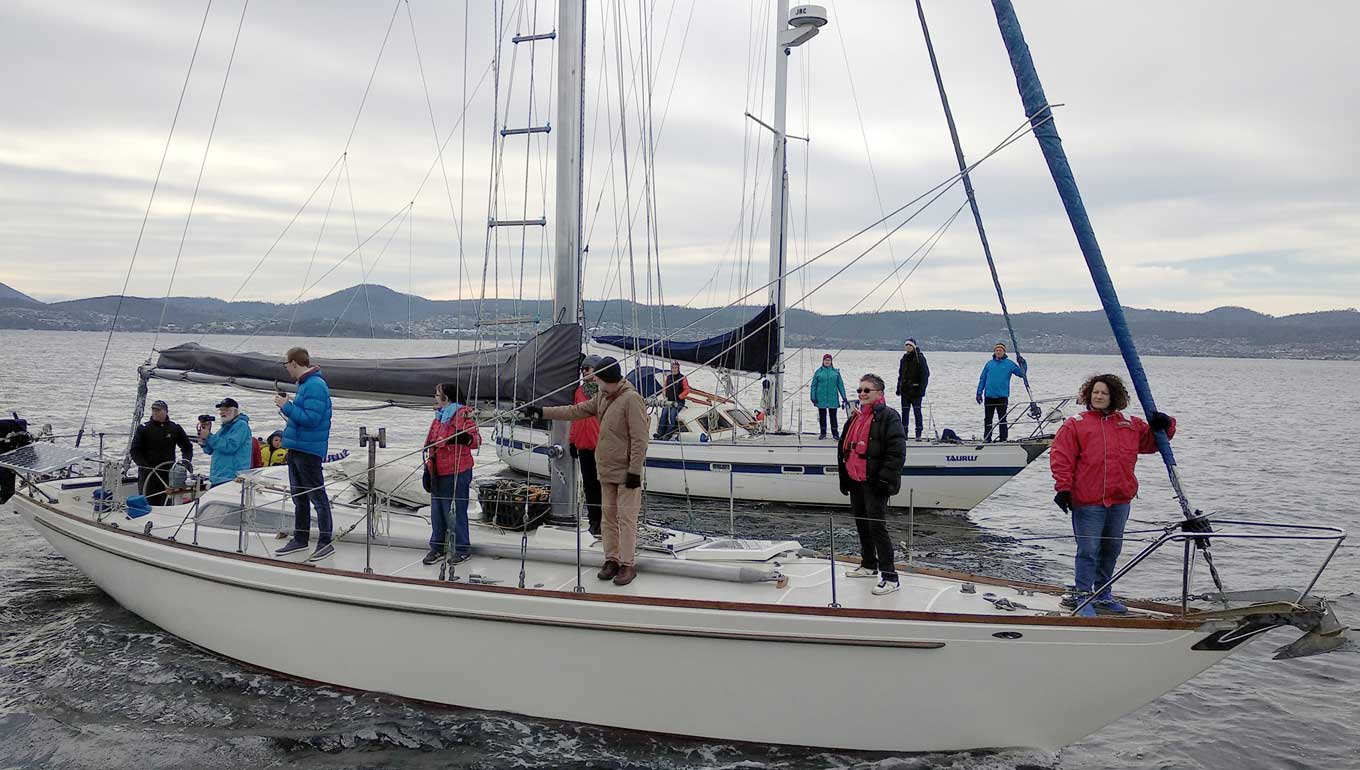 It’s not often a singer is given access to a life jacket.

Picture an overcast Tasmanian winter; a group of choristers sailing across the island’s gateway to Antarctica. They try to keep their lungs warm without any protection from the elements, and an icy wind takes control of their hair as they dart across the water.

There are four yachts in total, and members of the TSO Chorus divide themselves into smaller groups so they can each claim a patch of empty space on board. Social distancing still applies, so they can’t huddle together as they venture across the River Derwent. Instead, they connect through the thing they most enjoy: song. 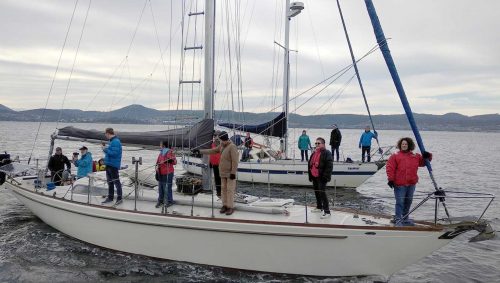 This event was one of the first to take place as part of the new Sunrise Project. It wasn’t officially organised by the TSO. Rather, it’s the result of a group of Tasmanians who aren’t willing to let go of the arts – especially during a crisis. So far, they have made music by the waters of rural and inner-city Tasmania (and under the watch of a drone and a few seagulls).

“The aim of the project is to have the majority of TSO choristers stretched along a beach, experiencing a sunrise and sharing the optimism that a fresh new day can bring,” TSO Chorusmaster June Tyzack says.

June leads the chorus through these gatherings in nature. The initiative emerged as a response to the COVID-19 lockdowns, which sparked an emotional rollercoaster among choristers when the first live concert cancellations were announced in March.

“It seems like years ago,” June says of the lockdowns. “So little information initially about a virus, and yet an uncanny amount of fear surrounding it.”

As with the orchestra, the TSO Chorus was hit hard by event cancellations. Initially, its singers were scheduled to perform alongside instrumentalists for A German Requiem – their first concert with new TSO Chief Conductor Eivind Aadland. But this ended up being recorded as the first instalment in the TSO Daily Dose series of online videos: no live audience had been present during the performance.

“I absorbed the immense disappointment expressed by our choristers, but I was excited by the novelty of it being filmed for broadcast,” June reflects.

“The unfamiliar silence after the final utterances of [the Brahms libretto] selig – ironically, meaning blessed, overjoyed – was an extraordinary unique moment shared by just us.

“Looking back, no one at the time could have even imagined that this silence would hold until now.”

Tasmania went on to confirm more than 200 cases of COVID-19. Around the time of A German Requiem, the state government had imposed strict lockdown measures for its residents. However, after months without community transmission, restrictions have slowly started to ease, and community members are allowed to interact with each other once again – responsibly, and with respect to public health guidelines.

It’s within this context that June exclaims: “It’s in my DNA to be creative and find solutions.”

June launched what she calls an “amphichorus – groups of nine choristers taking advantage of natural and man-made amphitheatres off the beaten track to sing new and familiar a cappella repertoire with the accompaniment of frogs, ravens and butcher birds”.

Their first major group sing took place before sunrise at Carlton Beach. This beach is about 40 minutes out of Hobart, and it’s popular among surfers – in the summer, that is. On this occasion, the isolated beach was cold, dark, and entirely worth the effort.

Chair of the Chorus Committee Reg Marron brought along a number of useful props, from handwarmers to miner’s lights and even a drone to capture the scene.

As singers were socially distanced, they were also supplied with a radio tuned to transmit their song. With no paper score, they sang from memory and from the heart.

“Choristers dotted the water’s edge and, with earbuds transmitting their own recording of the song, they sang loudly, proudly, and freely to the sunrise and a pink kunanyi/Mount Wellington in this distance.” 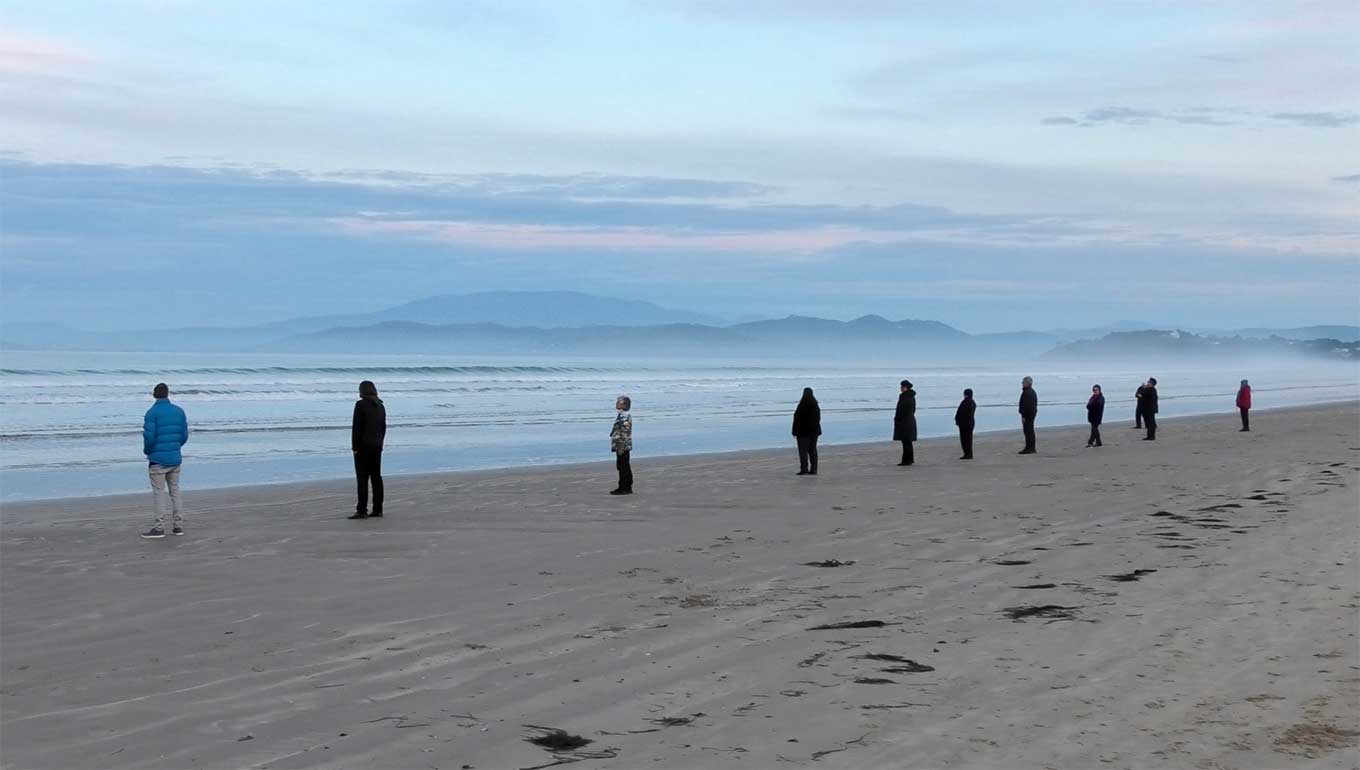 The Sunrise Project’s next event took place on an even grander scale – on the River Derwent itself. TSO choristers and friends together supplied four yachts, and the group divided itself among each boat, the set-up calculated to ensure appropriate social distancing. Between song and sanitiser, choristers enjoyed cups of tea, and June says “from bow to stern, their placement emphasised the beautiful shape of each craft”.

That members of the TSO Chorus would go to such lengths to unite voluntarily – outside their official orchestra commitments – indicates the strength of their connection as artists and locals with a love of music. As June notes, some of these choristers have rehearsed and performed with the TSO Chorus for more than 20 years; while young and emerging artists have entered along the way to develop their craft and gain professional experiences.

In this way, we can understand that while the cancellation of live music feels challenging or even heartbreaking to concertgoers, the practical impact for choristers can also be severe.

“To break the routine would potentially shred this tight-knit choral community with negative impacts on the mental and physical health of the choristers,” June says.

“The consequent erosion of the high standard that has been achieved over two decades was another significant factor in maintaining choral cohesion.”

As TSO instrumentalists have turned to chamber and solo performances through Daily Dose – some also continuing their private practice and music tutoring by distance – the TSO Chorus is finding fulfilment in its own community project. 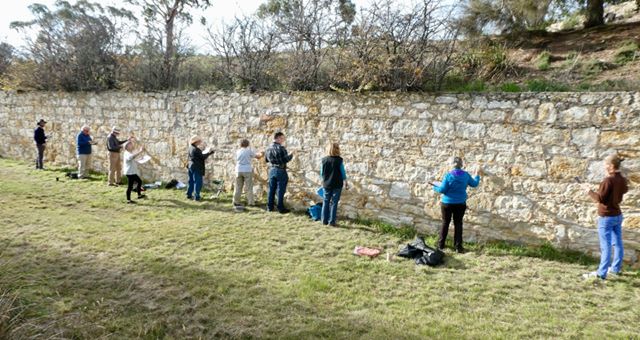 “The Sunrise Project has brought immense joy. It has released choristers from their homes […] It has provided a purpose for continuing as a chorus and for learning notes at home, and remarkably for memorisation.”

June has led the TSO Chorus since 2001, and together they have featured in countless orchestral events, as well as broader community programs such as Ten Days on the Island and Mona’s acclaimed festivals. Having worked so closely with these singers in their home city – and seen them through events and collaborations interstate and internationally – June admits she feels “a huge responsibility for the welfare of my choristers”.

It’s well-known that group singing has many positive affects on a person’s mental and physical health, and if ever such benefits were needed, it’s right now. June’s experience has taught her, through choral singing, “that cortisol associated with stress is reduced, that a feeling of satisfaction is enhanced by increased levels of oxytocin, that good posture and controlled breathing can have positive health outcomes, and that singing is cognitively stimulating”.

And it all begins with a single breath.

“It is the initial unison intake of breath that immediately unites everyone in the space, and each individual’s contribution to the harmony builds an atmosphere of beauty.”

Unfortunately, it’s necessary to acknowledge that each breath can also carry the risk of COVID-19. There has been a great deal of discussion about the dangers of choral singing in confined spaces and without appropriate physical distancing. The Guardian notes that “COVID-19 has silenced choirs”, while Gondwana Choirs has spoken in depth about “COVID-19 and the future of choral singing in Australia”.

Aware that singing in a poorly considered environment can be a “high-risk activity with dire consequences”, June therefore facilitates the Sunrise Project in a way that makes use of large outdoor spaces, sanitising procedures, and generous physical distancing protocols to better protect her choristers.

“I strive to be well informed, and only offer opportunities with a significantly lower risk – hence our Sunrise Project outdoors in our apparent virus-free Tasmania.”

It’s something of a side effect that these safer practices also provide beautifully artistic performance experiences. Through the limits of safety guidelines, June and the chorus have shown they are capable of unlimited creativity.

Moving forward, June has big plans for the Sunrise Project.

“I see it going to the mountains, to industrial sites, to football grounds, to vast open spaces, and filmed with the exquisite beauty of Hobart as the backdrop to the exquisite sound of a phenomenal group of people.”

The Sunrise Project does more for these people than fill the time before “normal” live performances return. The project offers them a safe space, a sense of community, and fosters good mental health and wellbeing. Further, these choristers are developing their talents – and sharing a rare bond they could never have predicted.

June anticipates that, in their future concerts, “the passion for singing on stage with the orchestra will be almost uncontrollable”.

“I believe that everyone’s outlook on what is essentially a hobby will have been transformed, and the true value of their art will be revealed – not only to the artist, but to the wider community.

“The Sunrise Project is also demonstrating unequivocally that there is hope and a future!”

Learn more about the way the TSO Chorus is coping with pandemic restrictions in our previous interview with June.

The Sunrise Project is an independent initiative launched by members of the TSO Chorus.