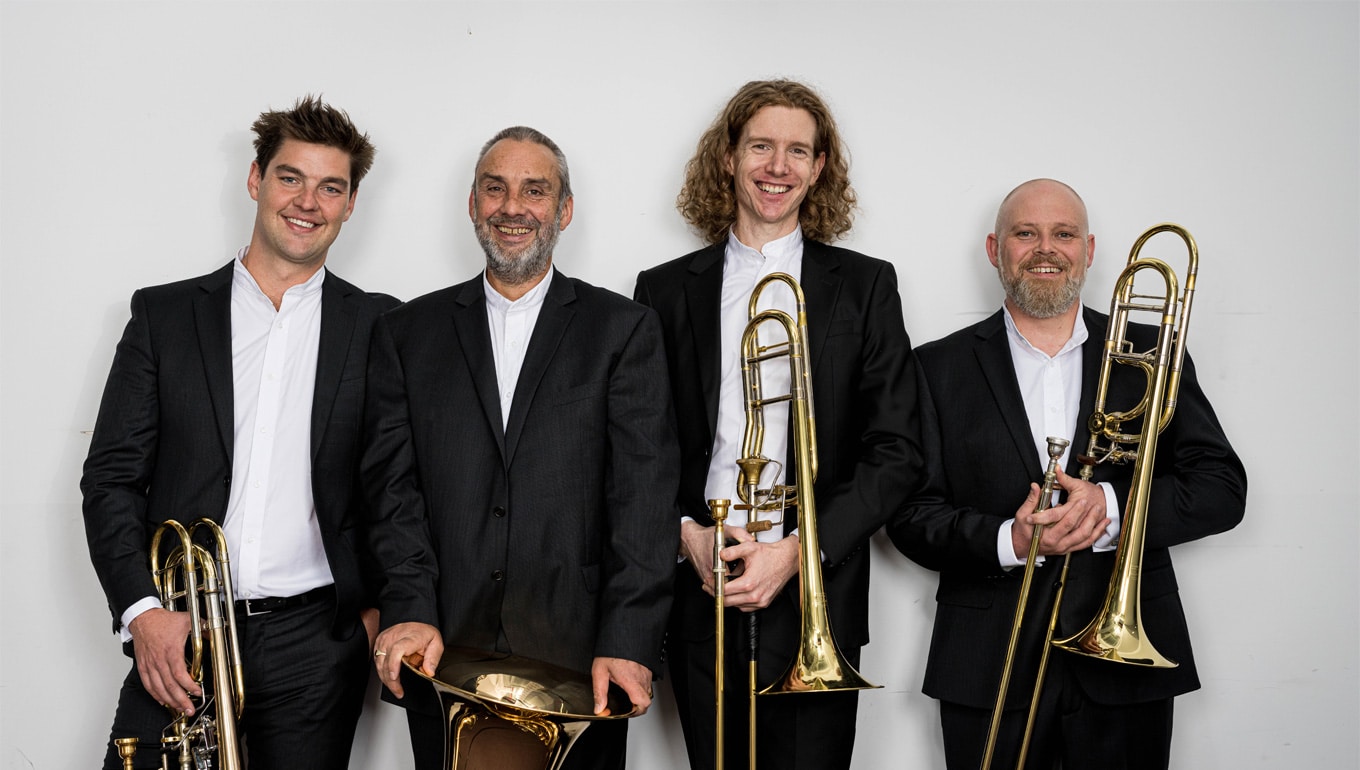 Tasmania’s newest brass ensemble is about to go on tour

Tim Jones is becoming a household name for lovers of Tasmanian music. Along with his role as Tasmanian Symphony Orchestra Principal Tuba, Tim has composed a number of works that in the past year have featured in TSO Daily Dose and Friday Night Live.

So you might wonder how he has the unstoppable energy to launch a new touring ensemble (and during a pandemic, at that).

“It seemed like the right thing to do in these uncertain times,” Tim says matter-of-factly.

“We have a wonderful low brass section at the moment, and we were all looking for opportunities to play more and to help the cause of our wonderful employer,” Tim says of his orchestral section.

“As musicians, we all have a desire to be heard and appreciated. We are all on a bit of a mission to educate people about the wide variety of music and sounds that low brass is capable of.”

The ensemble is designed to spread rarely heard music to regional Tasmania. Between mainstage TSO concerts in Hobart and Launceston, the players will team up to travel through countryside and wilderness, reaching intimate venues and audiences along the way. They’ll also connect with local musicians through workshops with community bands.

Their first stop is in the century-old Palais Theatre, which stands opposite the picturesque Huon River in Franklin.

Overland Ensemble was named from the players’ desire to make music in less-populated, but no-less-rewarding regions: “It is always rewarding to perform anywhere in Tasmania.”

“I particularly enjoy taking concerts to the public outside of the major centres,” Tim says.

“I feel it is important to share the orchestra with all Tasmanians. The ability to inspire other musicians is a driving factor as we all had many people help us along the way.

“Moving an orchestra around is an expensive proposition. Being smaller makes us a lot more mobile, and creates new performance opportunities.” 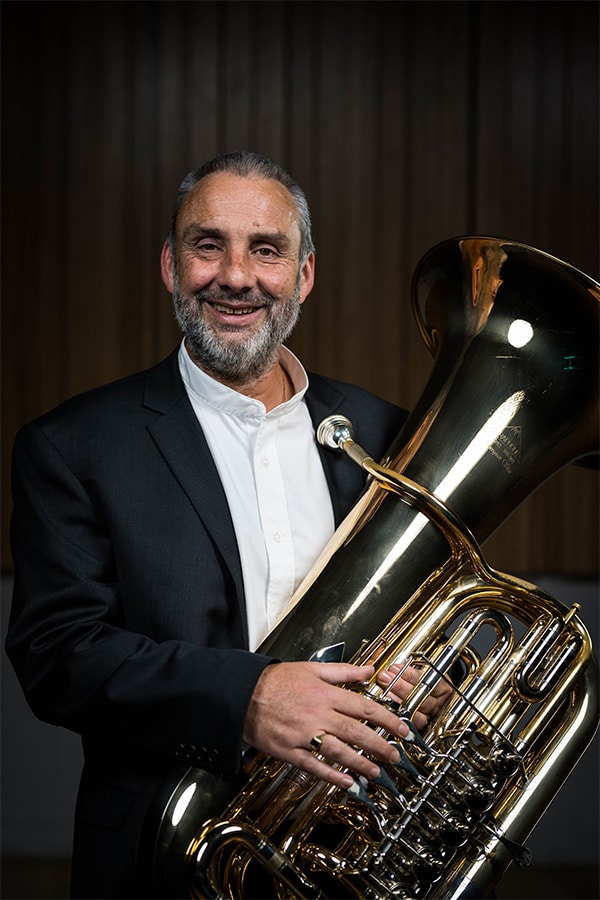 A new opportunity for local collaboration

Joining the brass players in their new initiative is local producer Frances Butler. Frances, who worked with TSO players such as Dave and Tim on A Tasmanian Requiem, now joins Overland Ensemble as producer.

“Frances has been a great help formulating our approach: lots of bouncing ideas back and forth, combined with her eagle eye for details,” Tim says.

Frances is an independent producer who runs Gap in the Fence, a creative business centred on interdisciplinary collaboration. She recently worked as a consultant with the TSO for its Daily Dose program during NAIDOC Week, and previously produced the project Floating Scores in association with the TSO.

The idea of Overland Ensemble appeals to her skills in collaboration and, of course, her love of excellent music.

“It’s really something else having access to what these guys bring to a project – just an incredibly high standard of professionalism and musicality, not only in the classical genre,” Frances says of the group.

“The added bonus is lots of laughter! Who wouldn’t want to work with them?”

Frances will work with the team as their tour manager, organising concerts, travel and accommodation, and workshops in collaboration with local brass bands.

“It’s mostly logistical, but a nice change – and a great opportunity to get around the island, meet new people, suss out small venues, and muse over the potential for this [group].

“The guys are game for pretty much anything, and keen to break some perceived boundaries – that’s where I come in.”

One of those boundaries, she explains, is already broken by way of its name: Overland Ensemble reflects the ethos of the group, but doesn’t refer to its instrumentation. This flexibility allows for any guest musician to join them down the track – lower brass or not. With Frances, the team seems to be keeping one ear open to the future.

In its pilot event, the group has selected “the pieces they enjoy playing together”, notes Frances.

“I think people will be very pleasantly surprised at what such an ensemble can do.”

Tim’s original work The Mountain demonstrates the overlap in his roles of composer and performer. (Though, the multitalented artist remains humble when describing his work: “The others aren’t sick of it yet, so it’s nice to perform it to new audiences.”)

The Mountain premiered last October as part of Friday Night Live – the TSO’s first public stream. The work is told in five movements, and while it was composed about kunanyi/Mount Wellington, Tim notes it can conjure a vision of any mountain across the island.

“Pleasingly, our listeners have been able to relate it to their own experiences. It is a celebration of what is great about this state.”

To wrap up these concerts, which will be short and sweet at one hour’s duration, Tim has composed even more music.

“I have also written a couple of short pieces so community musicians can join us on stage to finish our concerts.”

Community-building is deeply embedded in the values of Overland Ensemble. With a line-up of the state’s brightest lower-brass players, the group will share its knowledge with other musicians Tasmania-wide.

“Tasmania has many fine community ensembles, and it seemed like time to reach out to them,” Tim says.

“The TSO is a vast resource. We are looking to inspire local musicians and hopefully help their playing, too. We have workshops scheduled to give people an idea of what is musically important to us; a mixture of playing and talk including preparing the final two pieces for the concert.”

Adds Frances: “As the state’s largest arts organisation, TSO is definitely working to increase equity in access for the community, and I’m enthusiastic to assist with that.”

Frances too has benefited from community music. In the Huon Valley Society Orchestra, she played “the proverbial second fiddle”, sitting between string players who had themselves performed with the Tasmanian and Sydney symphony orchestras.

“It’s so important getting that band experience – it is the ultimate team sport!”

“Being an inherently collaborative medium, it’s logical to seek opportunities to play, regardless of who you are or where you’re at with your instrument. It also allows the tour to be more than just concerts; it means the ensemble can build relationships in communities of musicians, and everyone – even the professionals – gets to extend their practice.

“Who knows where that’ll end up?”