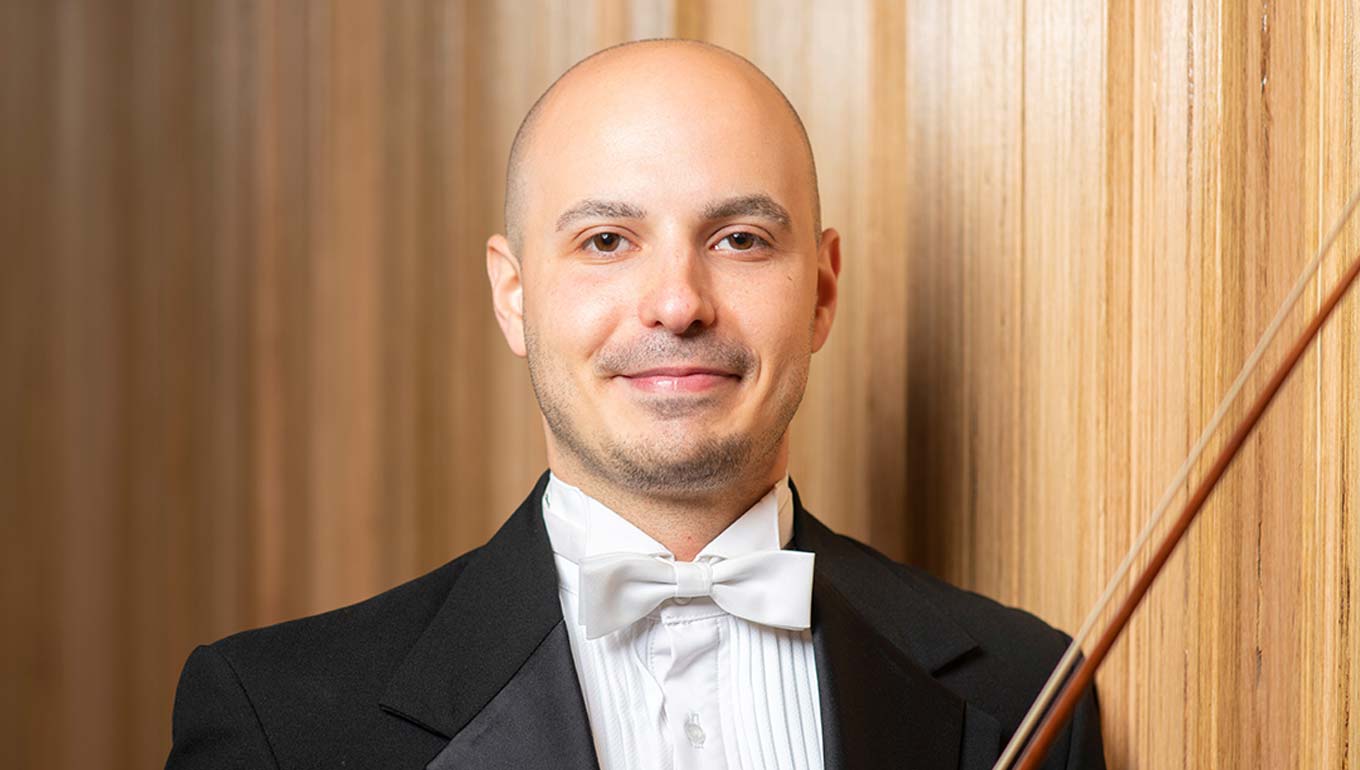 We were thrilled to welcome our new Associate Concertmaster, Sercan Danis (Serg), to the orchestra in October this year.

Serg, tell us about your musical background and how you came to be here.

When I was around four years old, my parents noticed me being into music. My dad would ‘test’ my musical ability by tapping progressively challenging rhythms and seeing if I could repeat after him and, having run out of patterns to come up with, he suggested to my mum that I take the entrance exam for the conservatorium. About a week before the exam, my mum and I were at a random store and the man by the counter took a look at my hands and said, “These are the hands of a violinist!”. It might have been a lucky guess but turns out he was right!

I started my journey with the violin before my fifth birthday at the Istanbul University State Conservatory, with Prof. Selahattin Yunkus, whom I really owe a lot. I have to be a good son here and give a special mention to my mum, who took me by the hand and went to every single one of my lessons, and never failed to point out when I wasn’t practicing the way I had been told. When I was around 10, we left Istanbul and relocated to Sydney. I studied with Alice Waten at AIM, and later attended the Conservatorium High School, studying with Goetz Richter until my second year of university, which I had the pleasure of spending with the late Wanda Wilkomirska. I then transferred and completed my bachelor’s degree, and a performer diploma at SMU Meadows School of the Arts in Dallas, Texas, with Emanuel Borok.

During my performer diploma, I met three great guys who were/are great musicians, and we founded the Altius Quartet, and later became the resident string quartet at SMU and had success around the competition circuit. I was also the assistant concertmaster of the Irving Symphony at the time, and after having won the silver prize at the 2014 Fischoff chamber music competition, I decided to leave the group and pursue an orchestral career full time. By this point, I had been in the US for eight years and, wanting to be closer to my family and friends back home, I played an audition for the Sydney Symphony in 2017 and had a wonderful experience on contract with the 1st violin section for two years. Having seen the Opera House with my own eyes for the first time at age 10 and imagining myself on that stage, playing with the SSO was something truly special. I made some lifelong friends, and the experience gave me the drive to have a successful audition for the TSO.

What are your impressions of Tasmania so far?

Having last lived in Central Coast, NSW, I’m used to being surrounded by national parks and beaches, but Tasmania is definitely on another level. As soon as I got off the plane on audition day, I felt a really good vibe. Even though it was my first visit, it felt like returning home, or like reconnecting with a long-lost friend, and I hope to always have that same feeling.

I’ve lived here for two months now, and I’m still not used to the constant on and off “mizzling” rain but I can say it’s kind of growing on me. People here are generally easy going, kind, and respectful. I think our general behaviour and outlook is directly connected to our environment, and Tasmanians truly reflect the beauty of this land.

What do you like to do when you’re not practising and performing?

I try to keep up with all things sports. I used to play soccer, and coming from a Turkish background, I go for Besiktas in the Superlig. Because of the time difference, I usually have to stay up until five in the morning to watch the games live, which isn’t ideal if I need to be at rehearsal that morning! But this is something my dad and I have done for many years now, so it’s become somewhat of a father and son tradition. Even when I was living in the States, we were doing live commentary by text.

I love to fish, either land-based off the beach or off shore – that’s my favourite pastime. I’ve heard there’s some really good fishing around here! I also like to stay relatively fit so I try to take a longer path when I’m walking over to the fridge.

You mentioned your Turkish background – have you sussed out any good Turkish eating here yet, or are you on the hunt?

I haven’t had a chance yet, but when I have time I’ll definitely be on the look-out! One of my favourite restaurants is “Safran” at Ettalong Beach, NSW. If you’re ever in the area, I highly recommend it.

Finally, how have you enjoyed your time with the TSO so far?

I’m really excited and proud to have this opportunity to be a part of the TSO family. There’s always going to be an adjustment period with a move like this, but everyone has been so welcoming - the musicians, staff, patrons, members of our audience, and I could tell from my very first week that I’m really going to enjoy being here.

It was a pleasure to lead the last concert of the year, and I’m looking forward to coming back after the break for an exciting season ahead!

Serg will be leading our first Live Sessions in February next year. More details available here.